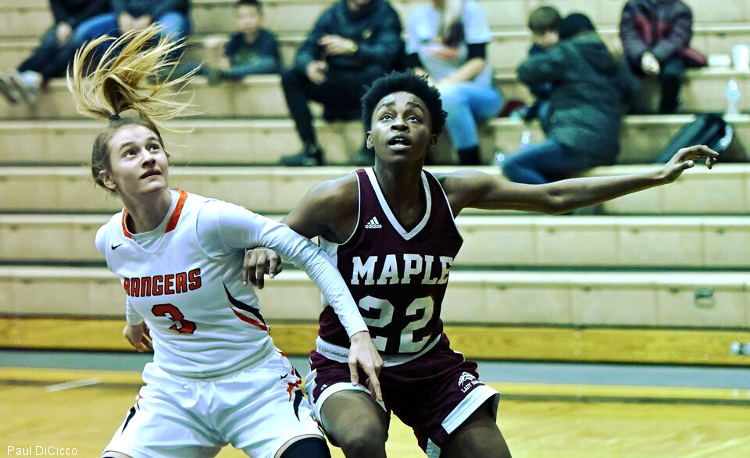 North used a stingy defense to create offensive opportunities and went on to beat visiting Maple Heights on Monday, 65-42.

The Rangers, who improved to 6-0 overall, outscored the Mustangs in the first quarter, 24-5.

“We had our best defensive half of the year in that first half, which was good to see,” North coach Paul Force said. “We set the tone early on and had solid balance.”

That balance continued throughout the game as Destiny Leo and Abby Carter both finished with a game-high 20 points and Maddy Hamilton added 17. Taylor Valaitis and Olivia Oostdyk each contributed with four points.

Leo scored 18 points in the first half.

“Destiny had a big first half and then made some big-time plays in the third quarter to get Maddy and Abby some open looks,” Force said. “To me, that speaks to the trust that we have in each other and the fact that these girls are able to put the team in front of themselves.”

North shot 44-percent from the floor and the Rangers were even more dangerous from behind the arc, where they connected on 12-of-26 3-point tries for 46-percent.

“The team effort to jump out to a big lead early in the game was very important,” Carter said. “It set the tone for the rest of the game and it seemed like everyone was hitting big shots. It really pumped us up and we were able to carry that energy throughout the rest of the game. The team really shares the ball well, and especially tonight I feel like we made sure to make that extra pass to the open teammate. With Maddy Hamilton hitting five 3s there was a lot of attention on her, which helped open shots up for me.”

She finished the game with four rebounds, three steals and three blocked shots.

“When we get told our matchups pregame, I always hope to have their best player,” she said. “It really motivates me and I set personal goals defensively to limit my girl’s offensive contribution. Hopefully, my defense will lead to forced turnovers, deflections and steals to make it easy for us to score in transition.”