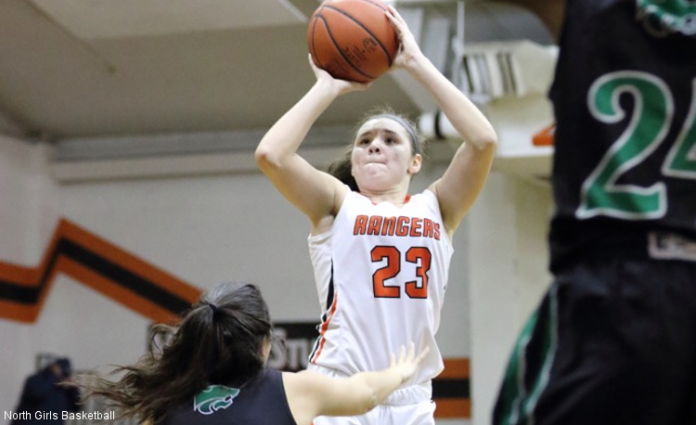 Big time players step up in big time games and the North Rangers have grown accustomed to Destiny Leo doing just that.

Leo scored a career-high 44 points and pulled down a career-best 18 rebounds in leading the Rangers to a 68-48 win over visiting Kenston on Saturday.

“The 44 was cool but we know Des can score at times, I was more impressed with her 18 rebounds,” North coach Paul Force said. “We’ve got a lot of girls that can score from time to time, but when any of them go get 15 plus rebounds, that’s the stuff we need to get to the next level.”

The Bombers played the Rangers nearly even in the second half but the early deficit was too much to overcome in the matchup of the Western Reserve Conference’s top two teams.

“I think we came out and executed on both ends and to keep a team like them to six points in the opening quarter and 16 in the first half, that was huge for us,” Force said. “We knew they’d find their offense and they did but we had the lead at the point and were able to manage the game.”

With Leo on their side, the Rangers did more than manage the game.

“I felt like everything was working today,” Leo said. “We were getting out and pushing the ball, coming hard off screens and just getting to the basket.”

She was also working hard under the glass.

“I don’t want to be known as just a scorer,” Leo said. “I like getting my girls good looks helping them get open and rebounds win championships so we’ve got to go after those hard.”

Abby Carter contributed to the win with 13 points and Avril Drew scored nine for the Rangers, who improved to 16-1 overall and 9-1 in the WRC.

“We knew they’d make some changes to how they defended Des and we tried to counter that this week in practice,” Force said. “I felt the girls got to where we wanted to be and we took advantage of what they gave us. I’m proud of them. They executed well against a good defensive team.”

Catara DeJarnette led the Bombers with 15 points and Rachel Apshago also scored in double figures with 11.