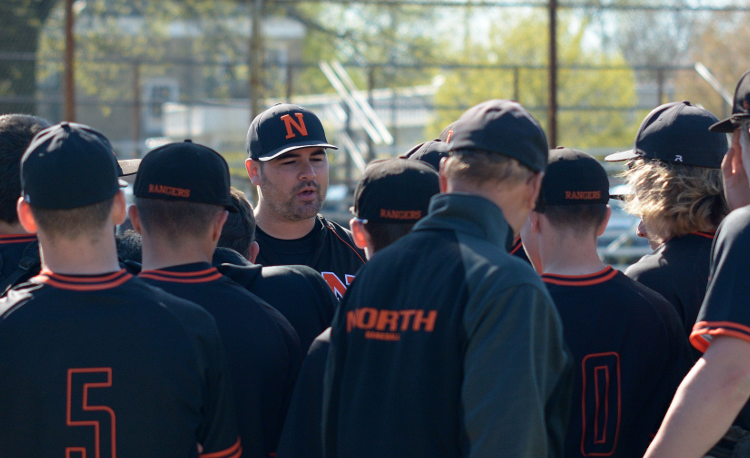 Graduation took its toll on the North baseball team but the Rangers have gotten off to a good start down in Myrtle Beach this week.

“We’re a little bit younger, we lost a lot of guys last year, but this group is hungry and although they’re young, you wouldn’t know they’re young because of their demeanor on the field and their attitude,” North coach Kyle Stahlberg said. “They’re hungry and excited and they’re here for one thing and that’s to try and win a baseball game. You love to see that heart and fire.”

“It’s been a tough start so far but the record isn’t indicative of how we’ve played,” Stahlberg said. “We had a 7-5 loss to the Tennessee state champion from the year before and we were actually winning for a little bit. To have a game like that against those guys is phenomenal. It’s early in the season and we’re still ironing things out. When we clean things up, I think it’s going to be a good thing. The loss, obviously we want to win, but it was a great game. The guys have nothing to hang their heads about.”

The Rangers have some depth and they’ll continue to work out the lineup as the season progresses.

Seth Higham and James Steinmetz will split time behind the plate, Brendan Collins and Dylan Froelich will both play first, Brandon Swearingen and Zach Mitchell have second base and shortstop locked up, respectively, and Steinmetz and Froelich will see time at third base.

Justin Fair and Nick Stuck will compete for time in left field, Stephen Davies and Collins are competing in center and John Keough will play right.

“I think with the talent we have, once we clean a couple things up, and these younger guys realize, they’re ready for this and when they get that confidence, we’re going to see really good things this year,” Stahlberg said.

Through the first four games, Collins and Max Patrick lead the Rangers with a .500 batting average and Davies is hitting at a .462 clip. Froelich also is making contact with his .385 average.

“Davies is hitting really well and Collins has been ripping the cover off the ball and spraying it around. That’s good to see,” Stahlberg said. “From top to bottom, we’ve done a really good job of hitting the ball. You look at a lineup after the game and look where you can make improvements but guys are putting together good at-bats. We’re looking at quality at-bats more this year and guys are stringing togethe4r quality at-bats even if they’re not getting on. Davies and Collins have had a few good days and Max Patrick has been putting the bat on the ball.”

Davies, Froehlich, Collins, Higham and sophomore Mike Beckman are among those expected to see most of the action on the hill for the Rangers this spring.

Already Beckman turned in a strong performance against the defending Tennessee state champs and Froelich hasn’t allowed an earned run in 5 1/3 innings of work.

“We’re really going to be looking to those guys for the pitching,” Stahlberg said. “They’ve got great stuff, we’ve just got to pound the strike zone and make everybody earn it.”

If things come together the way Stahlberg hopes they do, the Rangers should be competing with the Western Reserve Conference’s top teams this spring.

“We have a tough conference but I really think we can compete for it,” Stahlberg said.