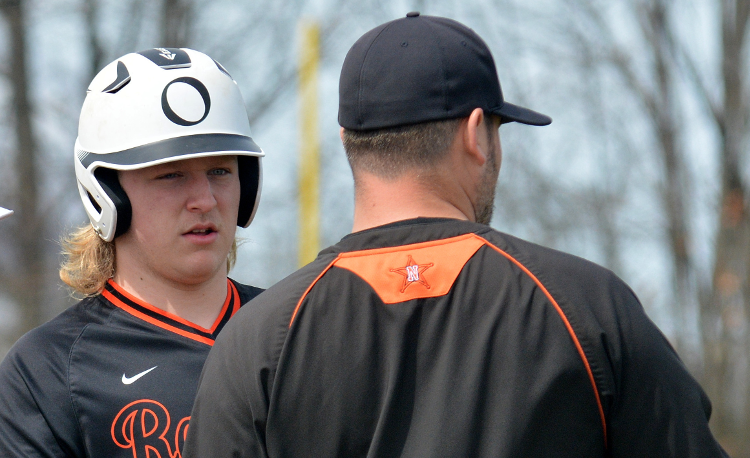 North’s 3-2 extra-inning win over visiting Mayfield on Monday all came down to the details.

The Rangers responded each time the Wildcats scored a run then took advantage of their own opportunities in the bottom of the ninth to seal their season sweep of the team projected to win the Western Reserve Conference.

“They’re pumped,” North coach Kyle Stahlberg said of the Rangers. “Realistically, you hope to go in and you hope to split with guys. We got the first game from them (on Friday) and I said let’s go out, there’s no pressure, we already took one; let’s go out there and just pay attention to the details. They played loose, even in the face of all that tension and stress, they played loose.”

Both teams were locked in a scoreless pitcher’s duel until the fifth inning when the Rangers walked in a run to give the Wildcats a short-lived 1-0 lead.

Justin Fair led off the bottom half of the inning with a single and moved to second on a wild pitch. He moved to third on an error and scored on Chris Molica’s single to tie the game.

Another leadoff walk and a pair of errors led to another Mayfield run in the top of the sixth but again the Rangers responded.

Dylan Froelich drew a leadoff walk in the bottom half of the inning and Nick Stuck replaced him as a pinch runner. Stuck moved to second on a wild pitch and to third on James Steinmetz’s single. Stuck scored on an error to lock up the score at 2-2.

It remained that way into the ninth.

“The pitching on both sides was unreal,” Stahlberg said. “Their pitcher threw a heck of a game. He had a nice, live fastball and his curveball was nasty. We scratched out two runs. Both runs were from behind. We were kind of playing from behind most of the game. They threw out a lefty in the eighth and ninth who was filthy. They pitched their tails off but our pitchers did the same.”

Steinmetz drew a leadoff walk in the bottom of the ninth. John Keogh replaced him at first base and moved to second on Max Patrick’s sacrifice bunt.

Fair then walked and Stephen Davies was hit by a pitch to load the bases with two outs.

Zak Mitchell then hit a pop-up into no man’s land behind second base and the ball dropped in for the North win.

“The guy was going backward and–I feel bad, the ball tipped off his glove–it’s a tough way to lose,” Stahlberg said. “It was kind of out there, one of those tough balls in between. We had runners in motion with two outs and that’s how we won the game.”

Steinmetz and Molica both finished with two hits for the Rangers.

Molica was pulled up from the JV and shined in his first varsity action.

“I throw him in there against a varsity player throwing 80-plus with a nasty curveball and he goes 2-for-4,” Stahlberg said. “That’s unbelievable confidence in yourself.”

Brendan Collins started the game for the Rangers.

He collected a no-decision after throwing 6 2/3 innings. He allowed two unearned runs on five hits and struck out eight.

Davies picked up the victory. He didn’t allow a run or a hit and struck out one.

“Brendan Collins was just locked in,” Stahlberg said. “He pounded the strike zone and kept people off balance. He did a phenomenal job through seven innings and then we brought in Stephen Davies and he did the same.”

North travels to Madison on Wednesday.