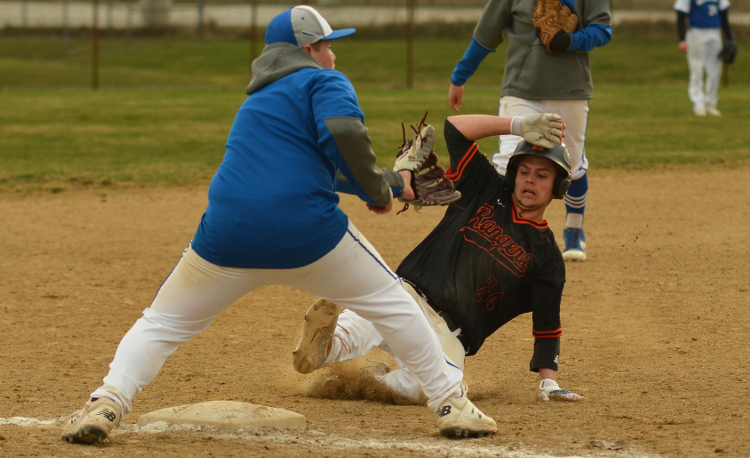 The Rangers pounded out 12 hits and beat the Blue Streaks 12-1 in five innings.

“We just came off of some big, dramatic tough fought games with Mayfield,” North coach Kyle Stahlberg said. “At practice (on Tuesday), we really focused on being prepared today and to hit the ground running. We also talked about details at practice and making sure we focus on doing little things right. I think when we can put our focus on details of the game and winning the little battles one pitch at a time, then our focus is where it needs to be.”

To help keep their focus on every pitch, the Rangers track their progress using a clipboard hanging in the dugout.

“Each guy tracks his contributions,” Stahlberg said. “It’s humbling and it forces perspective and focus before and after offensive and defensive contributions. The guys like it and I think it helps to break the games into smaller victories.”

Needless to say, the contributions board was overflowing on Wednesday.

Zak Mitchell singled, stole two bases and scored on James Steinmetz’s sacrifice fly to give the Rangers a 1-0 lead after the first inning.

North added three runs in the second, five in the third and four in the fourth to invoke the run rule.

Stephen Davies finished with two hits and a team-high four runs batted in. Mitchell, Dylan Froelich, Brandon Swearingen, and Max Patrick also contributed to the win with two hits. Swearingen and Patrick both knocked in a pair of runs and Froelich hit two doubles.

“Stephen Davies had a nice day at the dish, going 2-for-3 with four RBI,” Stahlberg said. “Brandon Swearingen also looked solid with a 2-for-3 day. Dylan Froelich roped two doubles. I was very happy with our approach at the plate today.”

Sam Michalski went the distance on the mound.

He allowed one earned run on three hits and struck out two Blue Streaks.

“Michalski was solid today,” Stahlberg said. “He worked his fastball around the plate and set up his off-speed. When Rogi is locating all his pitches he is difficult to hit. He came out and gave us five quality innings, which is exactly what we needed with a full slate of games coming this next week.”