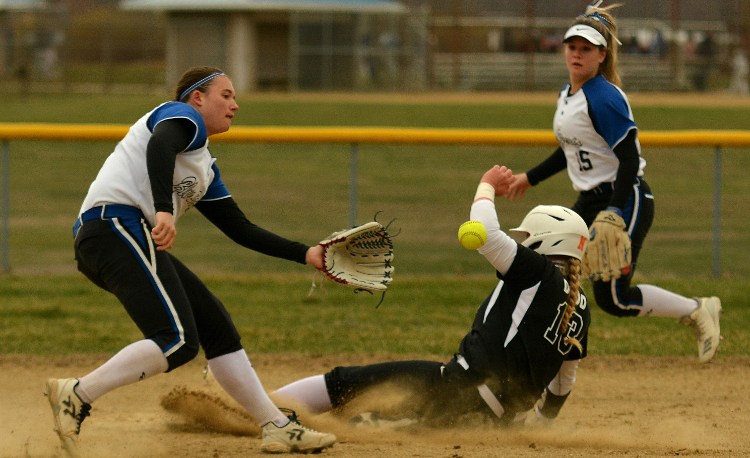 MADISON—Hailie Wilson hit a three-run home run and North made key defensive plays at crucial times to hold off Madison in a 5-3 road win on Wednesday.

With the win, the Rangers extended their win streak to six games and improved to 7-5 overall and 5-0 in the Western Reserve Conference.

“That win was huge for us,” North coach Taylor Braddock said. “The fact that we were able to overcome our five errors and still win a tough-fought ball game lends to the high level these girls are playing at right now. They’re riding a high as a team.”

North took a 3-0 lead in the top of the third when Adri George hit a two-out single, Hannah Harris reached on an error and Wilson pounded the first pitch she saw over the center field fence.

“We stress the importance of two-out hits and the girls put together good at bats when we needed them,” Braddock said. “Hailie came up big again today with a two-out, three-run home run.”

Alyssa Lavdis tripled and scored on an error in the bottom half of the inning to cut North’s lead to 3-1 but the Rangers responded with two more runs in the fourth.

Olivia Augusta, who also picked up the pitching victory, led off the rally with a double and moved to third on Megan Zaleski’s sacrifice bunt. Ashlee Kronik then tripled and scored on Madie Cicero’s single.

“It was just as important for us to tack on those two runs in the fourth with small ball and timely hitting,” Braddock said.

With a four-run cushion, it was up to Augusta and the Rangers defense to do the rest.

A leadoff walk in the bottom of the fourth did no damage as the Augusta induced two pop-ups and a ground ball to end the inning and the Rangers worked around an error in the fifth to maintain their lead.

It was a much different scenario in the sixth and seventh innings.

Allison Schultz led off the Madison sixth with a single, Cori Queen reached on an error and Sarah Stenger singled to load the bases with nobody out.

The Rangers made a key defensive play when Augusta fielded a ground ball in the circle, threw home to George, who stepped on the plate for the force out and then threw down to first base for the double play.

Augusta then issued free passes to Chloe Wakim and Destinee Kenst to cut the North lead to 5-2. She struck out Lavdis to end the threat.

“Olivia picked up her teammates when they made errors by keeping them in the game with her pitching,” Braddock said. “She had their back and made the pitches she needed too to when it mattered most.”

Halle Blackford singled and scored on Jordan Passalaqua’s double in the bottom of the seventh but again Augusta and the Rangers pitched and played out of the jam to seal their win.

“Each girl picked each other up today and that is what I am most proud of after that solid team win,” Braddock said.