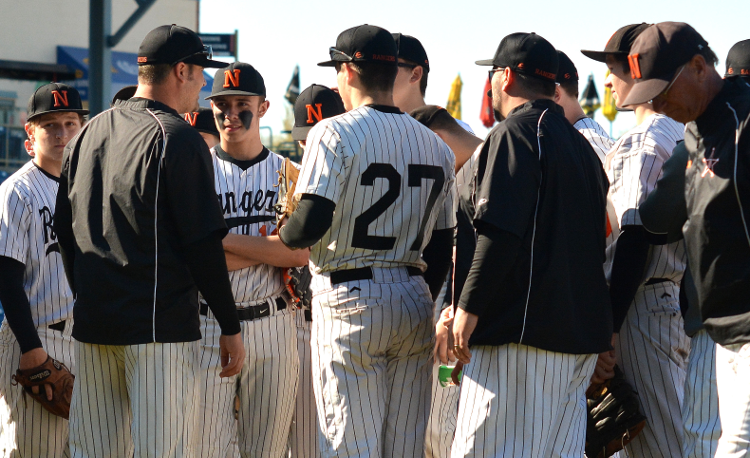 One day after a disappointing loss to Riverside, the North Rangers bounced back with a 3-0 five-inning win over visiting South at Euclid’s Serra Field on Monday.

Sunday’s 10-0 loss to Riverside didn’t sit well with North head coach Kyle Stahlberg nor the rest of the Rangers. A quick meeting to regroup and refocus helped the Rangers take care of business against their rivals.

“We had a long meeting with the team and some of our seniors and said we know what it is, it’s a mindset and our focus,” Stahlberg said. “We’ve got to start finding a way to bring that focus every day. It’s hard because they’re high school players but you’ve got to find a way to get in that zone. They’re very good but who is going to show up? It’s about trying to get them in the right mindset. It’s easy to talk about but it’s hard to do sometimes.”

North sophomore Mike Beckman had little trouble dialing in against the Rebels.

He allowed just two hits and struck out five in the complete game victory.

“I have never been as impressed as I am after giving the ball to him in the South game,” Stahlberg said. “He’s probably heard about the North-South rivalry since middle school and you give him the ball and hope he pitches his game because you know how good his stuff is. I was hoping he wouldn’t let the moment get him too excited and overthrow.”

Beckman helped himself by throwing first-pitch strikes to 11 of the 17 batters he faced.

“It was hard to get over the nerves at first but then I remembered my teammates were saying just think of it as a regular game,” Beckman said. “I started to get my groove when I felt like they couldn’t catch up to my fastball and my curveball was working. I was hitting the spot with my fastball and my curveball was being thrown for strikes and the seven men behind were really helping me out. Seth (Higham), my catcher called a good game.”

North scored single runs in the second, third and fourth innings to pull out the win.

Brandon Swearingen’s heads up play in the bottom of the second gave the Rangers a 1-0 lead.

Swearingen hit a one-out single, moved to second on a walk and to third on a wild pitch. After a strikeout for the second out, Swearingen scored on the catcher’s throw to first base.

“That was just Swearingen being a senior and being smart, the way the ball bounced, it bounced about four feet up the first base line,” Stahlberg said. “The catcher went out and grabbed it and Swearingen kind of decoyed like he was going back to third and then just took off when the catcher went to make the throw. It was a really good heads up play by Swearingen.”

Zak Mitchell reached on an error in the third then stole second and later scored on Higham’s sacrifice fly to make it 2-0. Swearingen drew a leadoff walk in the third and Max Patrick and Stephen Davies both singled to close out the scoring.

“We had a couple clutch hits and a nice stolen base by Mitchell that kind of opened things up,” Stahlberg said. “It was a good job by some of our older guys for sure and then obviously the youngster on the mound.”