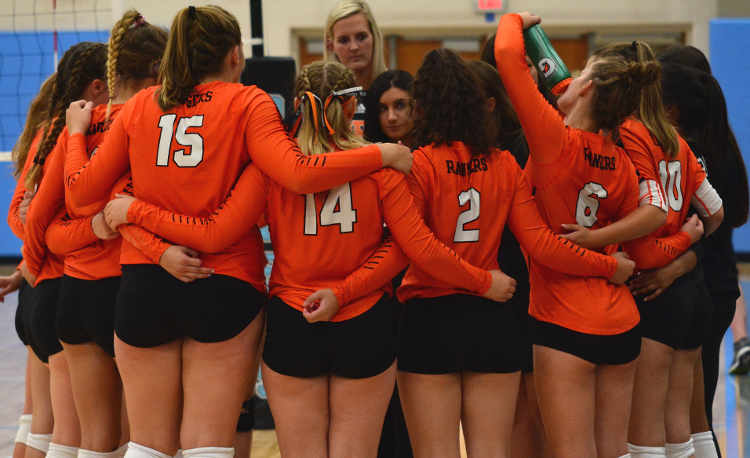 After losing their last two five-set matches, the North Rangers rallied back from a 9-1 deficit in the fifth set to win the match, 3-2.

“It was very exciting,” North coach Tamara Heller said. “We were due to come out on top of a five-game match and I’m very proud we were able to get it done.”

North opened the match with a 26-24 in the first set then lost the next two.

“We were playing not to lose rather than playing to win,” Heller said. “We said we needed all-out effort holding nothing back and that’s why we were able to battle back. We talk about being present only caring about the point being played, not looking at the scoreboard thinking about the huge hole we were in, and I think that one point at a time mentality was key.”

Abby Carter fueled the Rangers run in the fourth and fifth sets.

She finished the match with 21 kills, five blocks and three service aces. She recorded seven kills in the decisive fifth set.

“Abby came to play tonight,” Heller said. “Her true athlete comes out in pressure situations. She thrives in that.”

Julia Kerns contributed to the win with 13 kills, 20 digs and four aces and Dhvani Patel paced the Rangers with 25 digs and she added a kill.

Olivia Oostdyk pitched in with 12 kills and three blocks.

“She came out swinging tonight,” Heller said. “She’s getting more and more confident in herself in that middle position and I love the progress she’s made. The middles overall carried out team tonight.”

North travels to Geneva on Tuesday.