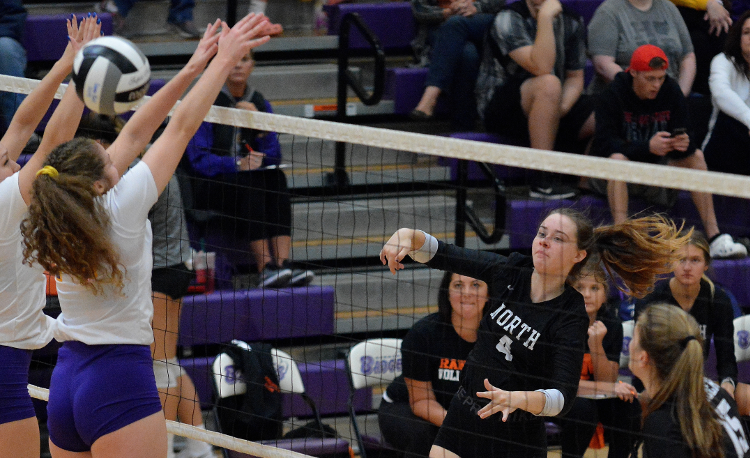 BURTON—North used its final non-conference match of the season at Berkshire on Saturday to fine-tune its offense and defense in preparation for the postseason.

The Rangers put together one of their top performances of the season in downing the Badgers, 3-0.

“That’s what should be happening at this point in the season,” North coach Tamara Heller said. “I think we’ve reached that point where we come out ready to play no matter who we’re playing and we take care of business. In the beginning of the season, we were still working out the kinks and getting used to some of the new things I threw at them, but now this is where we should be at this point in the season.”

Senior Julia Kerns helped the Rangers take control of the match when she served 11 straight points to turn a 10-9 lead into a 21-9 advantage.

She had similar runs in the other two sets and finished the day with four aces, eight digs, two kills and a block.

“I start with her serving because it sets the tone for the match,” Heller said. “She comes out firing behind that service line and can do some damage at the beginning of the game. That really helps.”

Oostdyk also contributed with two blocks, Mastroianni finished with 12 digs and Carter had four digs, a block and two aces.

“That’s very important,” Heller said of North’s defensive effort. “Defense is all about reading and being in the right spot at the right time. We practice that a lot and I think that our block has improved tremendously, which helped the defense so much. If the block is solid and disciplined then the defense can work around the block and be where they’re supposed to be.”

Berkshire, a Division III team, struggled to match up with the Division I Rangers, but head coach Joni Prots uses this nonconference match as an opportunity to challenge her players in the final week before the postseason begins.

“This is a game we keep on our schedule to get ready for tournament time,” she said. “I always feel that win or lose a match like this, there is something we got out of it because we had to play a team with good hitters. Those are great hitters. Their middles are probably the best middles we played against all year and they had two, so there was no break.”

The Badgers had their moments they just weren’t able to consistently challenge the North defense.

“We see the improvement every day,” Prots said. “There are matches we’re in now that we wouldn’t have been in at the beginning. Now, it’s just time to start to win some of those matches. The progress they made has been very good.”