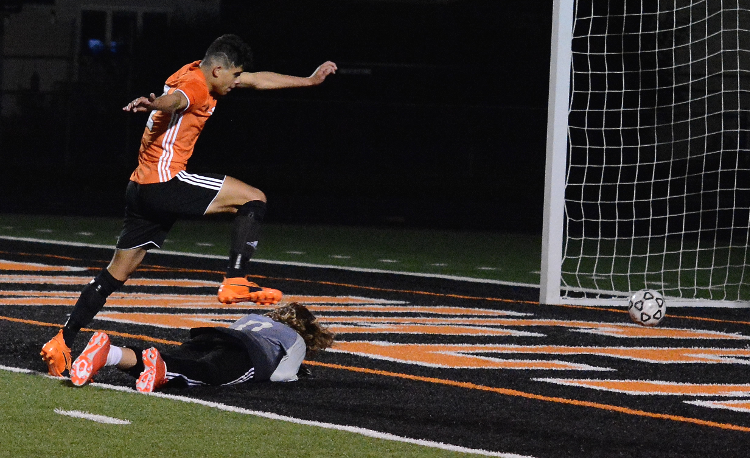 EASTLAKE—What a difference a month makes.

North opened the conference portion of its schedule with a disappointing 3-2 setback at Mayfield. On Monday, the Rangers defeated Brush, 4-1, to win its first Western Reserve Conference title since the 2013 season.

“We played Mayfield the very first game of the year, league-wise, and that was our worst offensive effort of the season,” North coach Steve Misick said. “I don’t pretend to understand how it happened but give credit to the boys; I kept them on the straight and narrow and we persevered. We knew what we had to do and we won the games we had to do. We did it.”

North got some help from rival South, who beat Mayfield 2-0, and Madison, who also beat the Wildcats, 2-0. Mayfield beat Riverside on Monday, 2-1, to knock the Beavers out of contention for the league title. Kenston tied the Rangers but lost to Mayfield and tied Riverside, to open the door for the Rangers to win the title outright with the win over the Arcs.

The Rangers weren’t about to let that opportunity slip away, especially on Senior Night.

Mike Shiciano scored off a Kaden Kocin assist just a minute and 30 seconds into the game. Kocin made it 2-0 three minutes later.

“Our mindset, we said it in the locker room, score two early and they’ll fold and that’s what happened,” said senior Max Patrick, who closed out the scoring with his goal in the 36th minute. “We got lucky at the end there and scored two more and got the win.”

Brush temporarily halted North’s momentum when the Arcs scored to cut their deficit to 2-1 with 29:47 left in the half.

Kocin took a pass from Dom Kustura and beat the Brush keeper one-on-one to give the Rangers a 3-1 lead with 16:25 left in the half and Patrick scored to make it 4-1.

The Rangers held off the Arcs in the second half to clinch the program’s 23rd league title in its 45-year history.

Misick, who was a co-captain on the first North team to win a league title, now has won 14 conference championships as head coach of the Rangers.

“I’ve been here for a lot of them,” he said. “This follows probably statistically our worst season last year, where we couldn’t do anything right. We had a lot of injuries and nothing happened for us until the end of the year when we won our last regular-season game and then beat Madison in the playoffs in double overtime.”

Misick was hopeful the 2019 season could see a return to the quality of play the Rangers were used to.

“I saw what we had on paper but it was a matter of their commitment off the field,” he said. “We changed some things in our offseason program. We did some different things and went back to the basics a little bit. The guys bought in. Max Patrick was probably the leader of the group and his biggest quality is his leadership. Statistically, he’s had a great year this year, which helps. That’s where it all started and the kids believed.”

The Rangers knocked off some quality programs in the preseason and that momentum carried over into the regular season.

Despite the graduation of several key seniors, the program is in good shape moving forward.

“Last year, we started three freshmen and physically it’s tough to play against seniors. This year, they’re older, they knew what they were getting into and it made all the difference,” Misick said. “For our team, we start four sophomores and our No. 1 sub is a freshman so I like what we have going forward but you can never replace what we have this year senior-wise. They’re all good guys.”

Now, the Rangers are off until Oct. 19 when they host the winner of the South-Cleveland Heights playoff opener in a sectional championship game.

The Rangers opened the regular season with a 2-0 win over Cleveland Heights and they won at South on Sept. 17, 5-2.

“The regular season doesn’t end until this Saturday but we got a first-round bye so we’ve got to wait until next Saturday to play,” Misick said. “That’s two teams we beat, but not easily. Those teams are going to come in charged up too but we have a really nice opportunity to advance. We’ll see how it goes.”