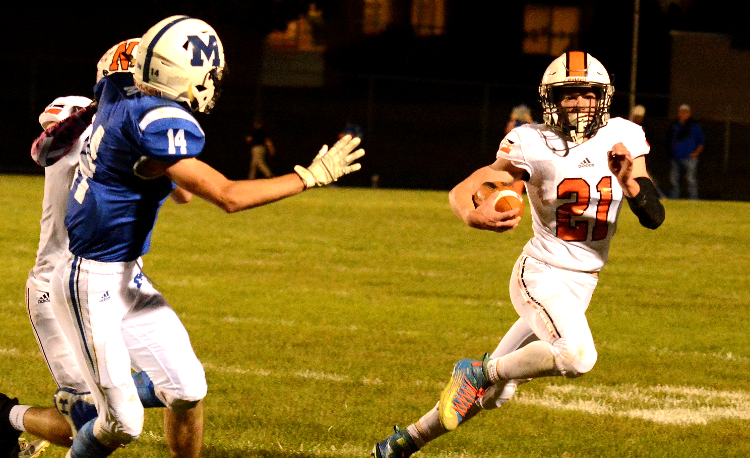 MADISON—North’s Chris Molica ran for 175 yards and three touchdowns but it wasn’t enough as the Rangers fell at Madison on Thursday, 50-20.

The Blue Streaks led just 21-13 at halftime thanks to a touchdown in the final minute of the first half. Madison opened the second half with the ball and scored again to make it a two-score game.

“We were hoping to get the stop, obviously, and keep it a one-score game,” North coach Shawn Dodd said of Madison’s late score. “They went up by two scores. We still thought we were in pretty good shape but we had to get a stop at some point and that didn’t happen.”

The Rangers didn’t have an answer for Madison’s 5-foot-5, 150-pound running back Austin McCourt, who ran for 211 yards and four scores.

McCourt scored on two touchdown runs of three yards in the first half and added scoring runs of 34 and five yards in the second half.

“Madison is always tough,” Dodd said. “They’re tough, physical kids. That’s what they’re known for. They run the ball hard. Coach (Tim) Willis does a tremendous job. They’re always a very physical football team. We just could not stop them running the football. I’m going to have to look at the film to see why. Was it something schematically or was it just one-on-one battles. I really don’t know at this point, but we just couldn’t stop them.”

Molica answered McCourt’s first score with a 34-yard touchdown run. The snap on the extra point try was bobbled and a two-point pass try hit the turf with Madison leading 7-6.

It remained that way until McCourt’s second touchdown run of the game put the Blue Streaks up 14-6 with 10:14 left in the half.

The Blue Streaks quickly moved down the field and Alex Dragas threw a 28-yard touchdown pass to Brad McKeon to push the Madison lead to 21-13 with 52 seconds left before the break.

McCourt opened the second half with a 34-yard touchdown run but again Molica answered. This time he ran for a 41-yard score to pull the Rangers to within 28-20 with 6:17 left in the third.

“He’s a special athlete,” Dodd said of Molica. “It all starts with the guys up front. Chris is a very athletic kid, a very fast kid, a very explosive kid. The last couple weeks he’s finally been able to get loose a little bit and people are able to see what he’s capable of.”

Unfortunately for the Rangers, that would be the last time they found the end zone.

Dragas threw his second touchdown pass of the game, this one to Cole Tanner for 27 yards, and the Blue Streaks went up 35-20.

McCourt added a five-yard touchdown run and Alex Blackie recovered a North fumble on a backward lateral and turned it into another Madison touchdown to close out the scoring with 8:46 left in the game.

“The two turnovers definitely didn’t help but we were having a hard time stopping them all night,” Dodd said. “I didn’t think the turnovers were the end all be all to the result, we just didn’t do a good job executing on the defensive side. The two turnovers definitely didn’t help and those are crucial turnovers. When you’re down by a few scores you can’t turn it over, especially the one for a score. That killed us. When they went up by three scores that’s when we knew we were in a little bit of trouble.”