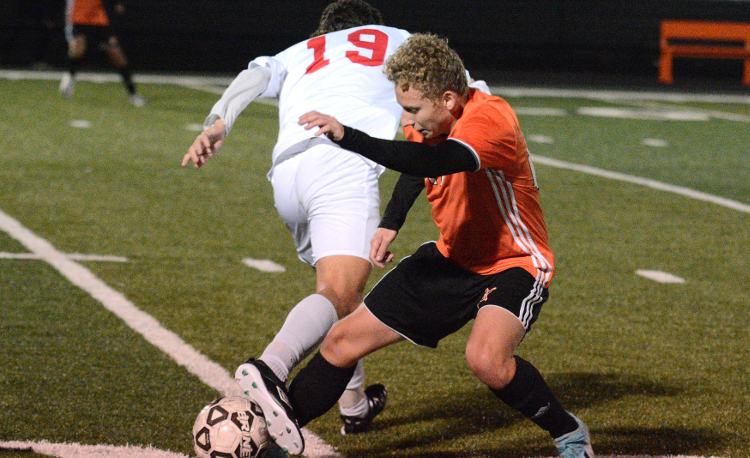 EASTLAKE—Several key plays led Shaker Heights to a 2-0 win over host North in a Division I district semifinal at Nick Carter Stadium on Wednesday.

North’s defense failed to clear a loose ball in front of the net and the Red Raiders pounced on the opportunity to break a scoreless tie with 32:48 left in the first half. Eight minutes later, the Rangers missed a penalty kick try and Shaker Heights added a second goal with 17:33 left in the half to close out the scoring and the Rangers’ season.

“It comes down to three plays,” North coach Steve Misick said. “We made a couple of mistakes and they capitalized and scored. We missed an opportunity with the PK and we had some nice chances in the second half but the kids gave a great effort. I can’t ask more than that.”

North entered the game averaging over three goals per game but Shaker’s defense proved to be up to the task.

The Rangers had several good looks at the net in both halves but just couldn’t punch in a goal. North dropped to 0-4-1 when not scoring in a game.

“When we lost, we haven’t scored,” Misick said. “This team shouldn’t be shut out, we’re that explosive. Give Shaker credit. They were organized and played hard.”

Shaker Heights also had maturity on its side.

“Shaker is more experienced,” Misick said. “They were bigger, stronger and faster. We started four sophomores and a freshman but that’s not an excuse why we lost. We’ve been playing those guys all year.”

With so many returning players, Misick is excited about his team’s future.

“It will help them grow, the younger players, but for us, our team leadership is leaving and we need someone to step into that role,” Misick said. “That was key for us in our big turnaround. We won three games last year and we won 11 games this year. I couldn’t be prouder of the kids. They stuck together even though we had a few bumps in the road.”

“I wanted to play on Saturday (in the district championship game) and I thought that would be a just end for our guys, but like I told the kids, you’ve got to take care of your chances in the big games and we didn’t do that tonight on both ends of the field,” Misick said.