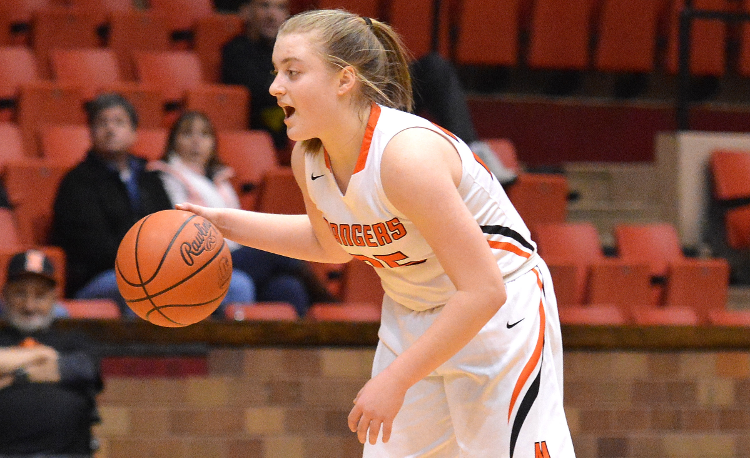 North returns three starters from last year’s team that made a run to the Division I regional championship game but a return trip to Canton isn’t a guarantee.

That’s why the Rangers remain focused on coming together as a team and in fine-tuning their game.

“We just want to stay in the moment and keep getting better,” said North coach Paul Force, who is in his 12th year as head coach of the Rangers. “We have a challenging in and out of conference schedule and we hope to grow and learn and play our best basketball as consistently as we can.”

North finished 25-2 overall and won the Western Reserve Conference with a 13-1 record.

While the Rangers return two All-Ohioans in Destiny Leo and Abby Carter, the Rangers know they’ll need others to step up in complementary roles to be successful this winter.

“We have two girls who have proven themselves as varsity lever scorers but we have capable girls around them who need to prepare and impact the game on offense and defense when their opportunities arise,” Force said.

Leo, a 5-foot-10 senior wing who has committed to play college basketball at Cleveland State, returns after scoring 27.8 points and pulling down 8.4 rebounds per contest. She also drained 85 3-pointers on the way to being named first-team All-Ohio and all-district as well as co-MVP of the WRC.

If all goes well, Leo should smash the North all-time scoring record as she is just over 60 points away from the top spot and she also could hit the 2,000-points mark this year.

“Destiny brings a lot to the table, certainly on the offensive end, but we are challenging her this year to expand her game on both sides of the court and look to improve on her transition game offensively and defensively,” Force said. “She’s put a lot of work into the offseason and I know she’s looking forward to getting going.”

Carter, a 5-foot-11 junior wing/point guard, already has committed to the University of Akron. She averaged 15.1 points and tied for the team lead with 3.0 assists per game. She also pulled down 6.5 rebounds per game and averaged a team-best 2.5 steals in being named honorable mention All-Ohio and All-WRC.

She is closing in on the 1,000-points scored mark.

“Abby is one of the best two-way players around,” Force said. “She had added to her offensive repertoire and we believe she’s one of the best defenders around when she’s locked in on that end. We’d like to see her get stronger and add some tools to both ends of the court, but we are excited to have her back and see how much she can improve.”

Junior Avril Drew is the third returning starter on the North roster.

The 5-foot-7 wing/post/point guard provides the Rangers with versatility on both ends of the court. She averaged 5.3 points and 3.4 rebounds per game as a sophomore.

“Avril is one of the most versatile players I’ve ever coached as far as position,” Force said. “She can play anywhere effectively; from the point guard to the post player. She has a unique skill set and plays as hard as anyone. We hope to see her bring a spark to the offensive and defensive end of the floor for us this season.”

Rounding out the projected starting lineup for the Rangers are Olivia Oostdyk and Cece Hamilton.

Oostdyk, a 6-foot senior post, will be counted on to battle in the paint and provide senior leadership.

“Olivia has worked hard to get her game and body ready for this season,” Force said. “I think she is ready to increase her on-court role and she is one of our best kids as far as bringing positive chemistry and leadership every day.”

Hamilton, a 5-foot-6 sophomore point guard/wing, was thrown into the fire last winter when she was forced into the regional championship game after senior Taylor Valaitis suffered a knee injury. She has many tools that could help the Rangers this season.

“We look for Ce to make a huge jump this year as she will get a lot of varsity opportunities and we hope that she can learn from some teammates who have experience on her,” Force said. “She can get to the basket, hit the 3, takes good care of the ball and plays hard on the defensive end. She is even one of our better rebounders, which is nice as she can initiate transition when she comes out of the pack with a rebound.”

Carli Wilson and Vajusi are both 5-foot-7 wings.

“Carli brings vocal leadership, a great grasp for our scheme on offense and defense, and the ability to knock down the open 3. We think she can give some valuable minutes throughout the season,” Force said. “Ledia can get hot in a hurry from the outside and is a great teammate and energy girl for us when she’s engaged. Looking for a productive senior year from her as she continues to improve and adjust to the varsity level.”

“Hailie plays with a ton of energy and physicality and we expect to see her contribute huge in the rebound and hustle play department,” Force said. “Madison is a good athlete. She’s working hard on the skills side of the game.”

Siekaniec is a 5-foot-5 guard.

“Dori has improved a ton this offseason and should keep that progress going into this season,” Force said.

North has the pieces in place to make another deep postseason run but Force knows the Rangers have a target on their backs and he’s working hard to keep his team from becoming too reliant on any one individual player.

“We want to be versatile on offense and defense so we are not one of those teams who you can ‘put into a box’ as far as style of play,” he said. “We want to be exceptional in the half and full court, versus man to man or zone defenses. We gained valuable experience last year throughout the season and postseason and hopefully, that helps us as we prepare for this season.”