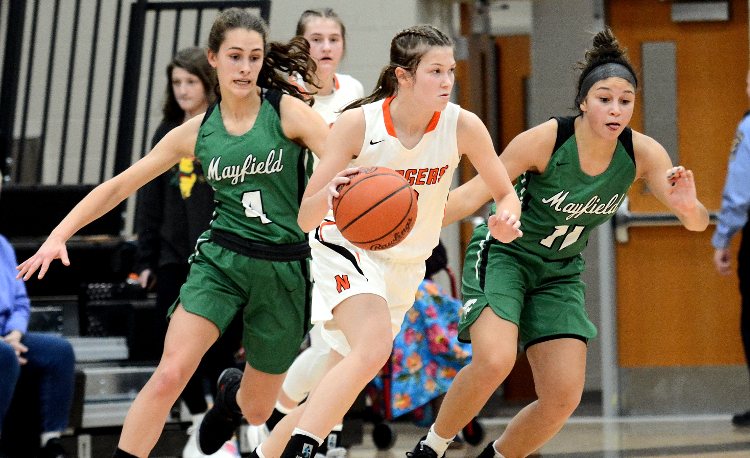 EASTLAKE—It wouldn’t be accurate to say North was solely focused on beating Mayfield to avenge last season’s three-point loss to the Wildcats that spoiled the Rangers’ perfect conference record.

It also wouldn’t be accurate to say the Rangers had completely forgotten about the upset loss before they went out and beat the visiting Wildcats on Wednesday, 66-39.

“We talk about how a lot of different things can fuel the fire but your spark has to be bigger than that,” North coach Paul Force said. “It can’t be about revenge or anything. It’s certainly fine if you remember those feelings, but your why and your spark has got to be deeper and be more important than that.”

The Rangers, who improved to 5-1 overall and 3-0 in the Western Reserve Conference, reeled off a pair of six-point runs in the first half but Mayfield’s Ashley Dearden hit a 3-pointer to end each.

Abby Carter’s 3-pointer at the buzzer extended North’s five-point run into an eight-point run to give the Rangers a 33-19 lead at the break.

North then went out and scored the first six points of the third quarter to push its lead to 20 points.

“In the second quarter, we got a little bit of space,” Force said. “They battled and they were prepared and they always guard us hard. We expected that coming in. I think a real key turning point was that third quarter, this is two games in a row where we’ve had a really nice third quarter on the defensive end, and some shots started falling. I thought we got good looks early in the game; we just weren’t able to hit the shots. We rebounded well all game, we took care of the basketball and finally, in the second half, the offense opened up a little bit.”

Mayfield held North leading scorer Destiny Leo to just 19 points, only the second time this season she’s been held under 20, but the rest of the Rangers responded.

“They did a great job and had a great game plan to slow her down,” Force said. “Other girls stepped up and we still scored the ball well. We have enough confidence in one another that regardless of how teams defend the girls are going to go out and take shots when they’re open. Carli took advantage of a couple of opportunities. Olivia had a couple buckets inside, Hailie with some hustle plays and Avril, too. We have girls that are capable and fortunately, playing with Destiny opens things up for the other girls.”

Mayfield’s game plan nearly worked to perfection but the Wildcats just didn’t have the stopper for the third-quarter run the Rangers used to put away the game.

“We saw in the box scores of the previous games, mostly because they have the capability to do this, they go on these massive third-quarter runs,” Mayfield coach Ryan Looman said. “The message was we have to limit that. I thought we did an OK job fighting back in the third quarter but when you have the 12 and the six (point runs), that’s a lot of separation for them and allows them to play a lot freer and forces us to play a little tighter and not execute like we should.”

The big shots the Wildcats hit in the first half—especially in the first quarter as North held a 9-7 lead—suddenly weren’t falling in the second half and Mayfield struggled to protect the basketball.

“That’s a good team but the thing we were kind of upset about as coaches is we shot ourselves in the foot so many times,” Looman said. “Whether it be a missed rotation or rebounding and we had a couple turnovers in that run itself, a couple possessions where we came down, passed the ball out of bounds and had a steal for them on another. We’ve got to limit those times and I think that’s just our maturation process. We’ll get it figured out.”

Dearden led the Wildcats with 15 points and finished the night 3-of-6 from behind the arc.

“She’s been a surprise all year,” Looman said. “We put her in the lineup mostly for defense and that’s what we kind of thought that she could do but she was Johnny on the spot at times.”