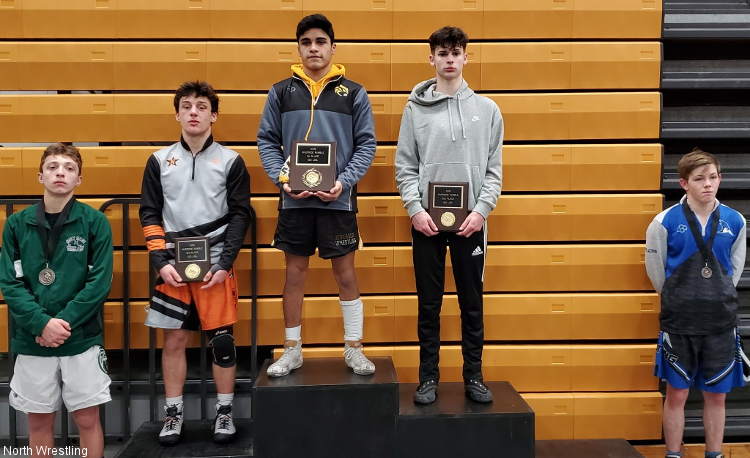 Five North wrestlers earned a spot on the podium to help the Rangers finish seventh as a team at the 2019 Riverside Rumble over the weekend.

“Overall, I think we wrestled well,” North coach Anthony Grim said. “We have a pretty young squad this year and our numbers are kind of hurting with the levy failing. We’re just working with what we’ve got and trying to fill the lineup.”

Junior Joey Davis led the way with a third-place finish at 120 pounds.

Davis, who was a district qualifier as a freshman, finished pool wrestling with a 2-1 record. His only loss was to eventual champion Chris Rocha of Riverside.

He opened up bracket wrestling with a loss to Lorain’s Xavier Santiago then responded with a pin and a 9-4 decision to advance to the third-place match where he earned a rematch with Santiago.

Davis avenged his earlier loss to Santiago with a pin in 1 minute, 30 seconds to finish the tournament with a 5-2 record.

“He was battling a pretty tough knee injury and lost his first match and then wrestled his way back and had the same kid and ended up pinning him,” Grim said. “We kind of got the knee injury under control–he had a bruised knee and couldn’t get down on shot and he couldn’t get comfortable in the referee’s position. We got the knee thing under control and he looked like Joey Davis again.”

Also placing for the Rangers were Derick Martinez, who was fourth at 113, John Sethman and Eric Hiser, who placed fifth at 106 and 182, respectively, and Dylan Young, who was sixth at 138.

“Sethman and Martinez both kind of surprised me,” Grim said. “Sethman made it about two weeks as a freshman and came back as a junior and it looks like he has been wrestling the whole time. He ran into a tough kid from Brecksville. He had a decent match but ended up falling to him and he had a tough match after that too. He was in a tough half of the bracket. Martinez, who I think is a bit undersized for the 113-pound weight class, came out and gave it his all. He lost to (Dustin) Sweeney from Geneva and a pretty tough freshman from Lorain.”

The Rangers will compete in the Rebel Invitational on Saturday.