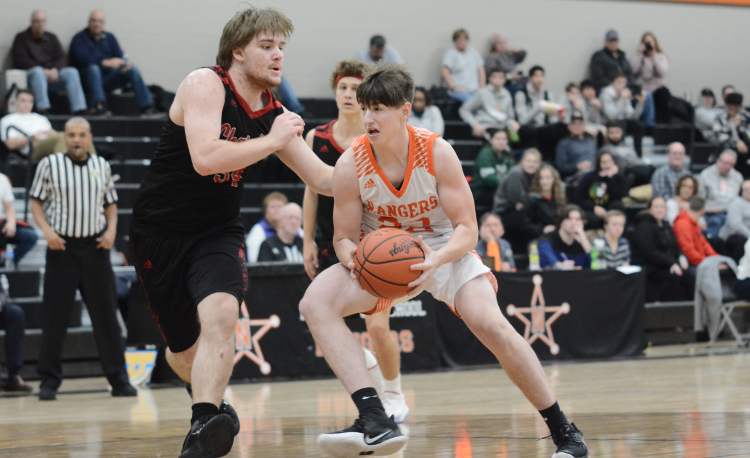 EASTLAKE—Despite watching most of the first half from the bench due to early foul trouble, Brady Toth scored a game-high 22 points to lead Chardon to a 78-65 win at North on Friday.

Toth drained two 3-pointers and a field goal in the first quarter but picked up his third foul with 7:19 remaining in the second, forcing the Hilltoppers to play without two of their top players in Toth and Nathanael Sulka, who was out with an elbow injury.

“I’m proud of our guys and happy for them to find a way to get it done,” Chardon coach Chad Murawski said. “We just had a gut check a little bit.”

With Toth sidelined for stretches in the first quarter, the Rangers recovered from an early 15-4 deficit to tie the game at 21-21 after the first eight minutes of play.

North eventually took the lead in the second quarter but couldn’t hold it and trailed at the break, 40-38.

The Hilltoppers used a 10-0 run early in the second half to create separation from their hosts.

“It started with the last minute and 40 of the second quarter where you’re up by three. We have to control tempo and clock there,” North coach Rob Koelling said. “In two different possessions, we were calling out plays to do so but we took quick shots instead and we ended up sharing three possessions each. We control that and we go into the halftime with the lead and I think it’s a different flow coming out in the third quarter.”

“We attacked the basket in the first half and really pushed the tempo,” Koelling said. “We got away from that in the second half and I think the offense stalled a bit and it showed. When we attacked, we collapsed the defense and got the open looks we wanted to in the first half. We got away from that and we were settling for too many outside shots compared to getting to the rim in the third and fourth quarter.”

Coby Palovich and Drew Fetchik also scored in double figures for the Hilltoppers with 17 and 12, respectively. Elliot Tyminski and Shane Callahan both finished with nine points in the win.

“We just have to learn to not turn the ball over,” Murawski said. “We’ve dealt with some adversity with Sulka not being here. Just step up, nobody cares, and get the job done.”

Four Rangers finished in double figures in the loss.

Kyle Randle and Nate Scott tied for the team-high with 15 points while Jason Reik finished with 13 and Mo Morgan added 10.

“We attacked early on and that was a big factor into getting a lot of guys touches and getting a lot of guys into the flow of the game,” Koelling said. “If we can bottle up the first half and play all four quarters like that we’re going to be just fine. Guys were feeling good in the first and second quarter with the shots dropping, with attacking, getting to the free throw line. When we got to the free throw line 20 more times a game things are going to go our way. It’s just getting that mindset and mentality.”

Reik drained three of his four first-half 3-pointers in the first quarter as the Rangers rallied from that early double-digit deficit.

“We count on him,” Koelling said. “He’s got a quick trigger and he’s a great shooter. It’s just finding him spots, but again that’s attributed to other guys attacking the rim and drawing the defense and him benefitting from that. What we’re trying to get all these guys to understand and to realize is when they have the ball, can I create for myself, can I create for a teammate? When we have that you see the offense flow and you get four guys in double figures and good things are going to happen.”