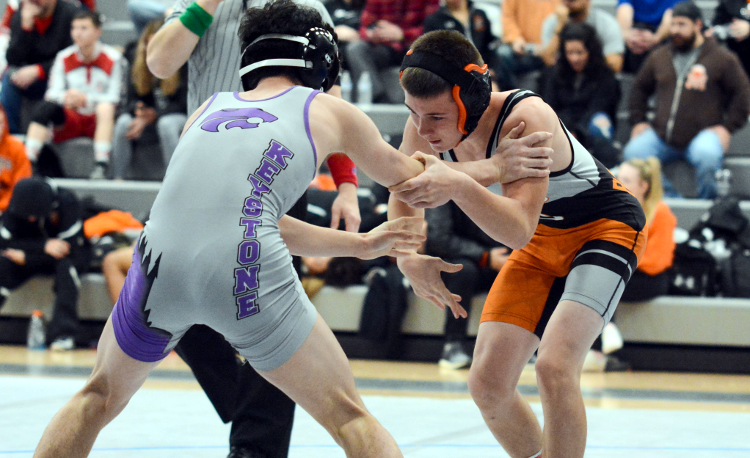 WILLOUGHBY–North juniors Gabriel Meros and Joey Davis both earned second-place finishes to help the Rangers finish sixth as a team at the 2019 Rebel Invitational on Saturday.

Freshman Derick Martinez and sophomore Eric Hiser also finished among the top four for the Rangers.

“As a team, I was happy with our performance,” North coach Anthony Grim said. “We lost a lot of matches we should have won and had a few where we lost by three points or less, which is sometimes worse than getting pinned. Our freshmen are getting in a lot of varsity time, which will pay off big in the future.”

Meros went 3-0 in pool wrestling with a pin and a technical fall then split his two matches in the 113-pound championship bracket. He advanced to the championship match with his second pin of the day before falling to North Olmsted’s Jayden Brubaker to finish second.

“Gabe is a great young man,” Grim said. “Overall, he has a lot of heart and is never out of any match no matter the score. He was moving well on his feet getting to good angles and taking great shots. He had a hard (weight) cut week so I was very impressed by him. The biggest heartbreaker was losing our final match against the North Olmsted kid we beat earlier in the tournament.”

He recorded two pins, a technical fall and a 7-0 win. His only defeat came to eventual champion Kyle Rowan of Perry, the defending Division II state champion and a Stanford commitment.

“Davis is never a guy I have to worry about,” Grim said. “I know he is doing the right things in the room and out. He wrestled hard all day and got a lot of great wins. I was super happy with his day. His last match was one we knew was going to be very hard. I expect great things from Davis this year. He and Gabe are partners in the room and constantly push each other.”

Martinez bumped up two weight classes to 126 pounds and finished third with three wins, including a pair of pins.

“He lost his wrestle-off to Gabe earlier in the week for 113 and could not challenge at another weight so he decided to fill our 126 hole in our lineup as a freshman walking around at about 118 on a daily basis,” Grim said. “I was extremely impressed by his performance. Taking third was huge for him giving up a lot of weight and he didn’t let that shake him. He went out ready to go every match. He is a young man with a bright future in the sport. We just have a few middle school habits we’ve got to get out of him.”

Junior John Kropf finished 3-2 at 132 and both Dylan Young and Aaron Needles won a pair of matches on the day. Young, a junior, placed sixth at 138 and Needles, a freshman, was sixth at 220.