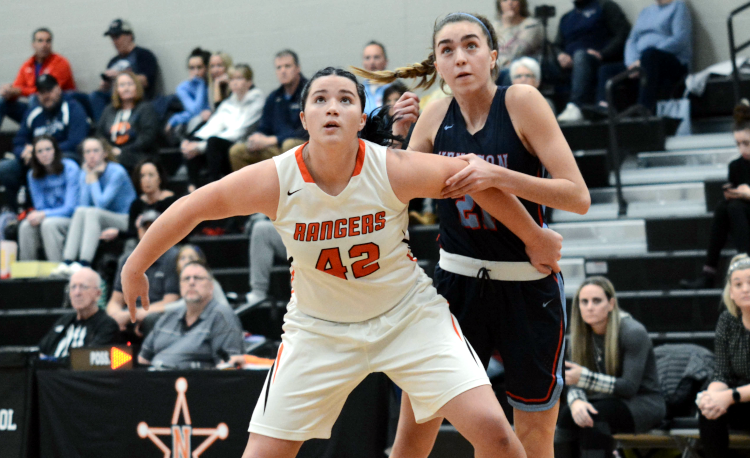 EASTLAKE—Outside of conference play, North and Kenston aren’t true rivals but the Rangers won’t soon forget the one-point loss to the Bombers in the 2018 district championship game.

That stinging defeat has inspired the Rangers to always bring their best when facing the Bombers and Saturday’s showdown at North was no different.

Despite Kenston draining 11 3-pointers, the host Rangers defeated the Bombers, 63-47.

“I think since that 2018 district final it’s been a little bit of a rivalry between the two of us,” North coach Paul Force said. “Unfortunately, they moved them out of our district but we still see them twice in league play. I know they look forward to it and we look forward to it.”

Senior Destiny Leo was the only Ranger to play in that 2018 district final and she takes it personally each time she plays against the Bombers.

She scored a game-high 33 points in Saturday’s win.

“It always is (intense), ever since that district final and the conference thing that happened like three years ago,” Leo said. “Every year it’s a been a battle every time we play them. It’s just nice to come out on top.”

The Bombers opened the game with six straight 3-pointers before securing their first layup and scored 21 of their 24 first-half points from behind the arc.

“Credit to them,” Force said. “One thing they do well is put five girls on the floor who can all shoot the 3. That creates some matchup problems; some things we wanted to do defensively that they took advantage of.”

Leading 30-24 at halftime, North adjust its defense and limited the Bombers to just four 3s in the second half despite shooting 39 in the game.

The Rangers began pulling away in the third quarter thanks to a pair of key hustle plays.

Leo missed a pair of layups but Avril Drew and Hailie Wilson both were in the right place at the right time to pull down the offensive rebounds. Drew and then Wilson kicked the ball out to Leo, who hit back-to-back 3-pointers.

“Some of our best plays were hustle plays that were made on offensive rebounds,” Force said. “Avril got a big offensive rebound early and got a putback off a missed 3-pointer. For Hailie, to come off the bench and make a hustle play was good to see. We always try to preach to the girls, especially the ones coming off the bench, there are so many ways to impact a game. They may or may not show up in the state line but whether or not you score a point or get five rebounds, when you make a hustle play like that to get us an extra possession, those are huge plays.”

“We wanted to keep them off the line and take care of the ball,” Force said. “I think we did a good job of keeping them off the line but we threw the ball around a little too much for what I’d like to see. It’s nice to not have your best game on the offensive end and still get the win.”