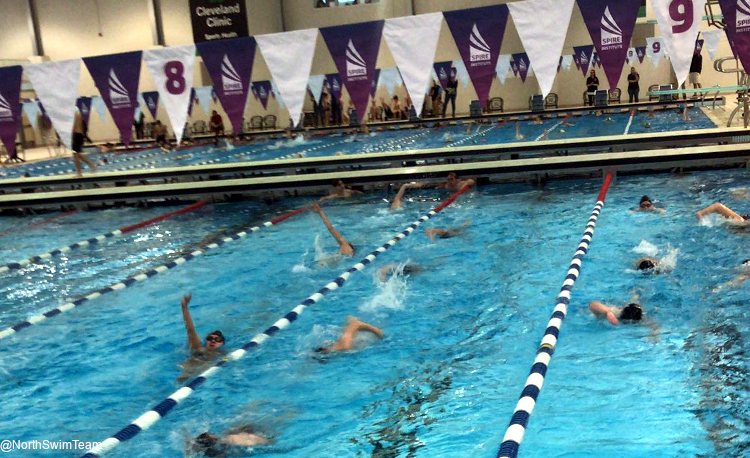 North’s swim teams had quite a day at the 2020 Western Reserve Conference swim meet at SPIRE on Saturday.

“I’m very pleased with both teams’ overall performances,” North coach Justin Ramey said. “(We had) a lot of great finishes and I’m always happy to see personal best times for a lot of the team.”

North’s girls’ team finished fourth overall with 251 ½ points. Chardon won the event with 521 points, Kenston was second with 351 ½ and Mayfield finished third with 304.

“With the amount of tough competition in the girls’ field, we were happy to come out and compete and score as much as we did,” Ramey said. “It was a great whole team effort.”

The Rangers finished sixth in the boys’ competition.

He finished first in the 100-meter fly with a time of 59.21. Humble also finished third in the 200 individual medley and he teamed up with Brian Kaucic, Sam Ganim and Nick Kaucic to finish third in the 200 medley relay.

“Dominic has been focused on the 100 fly for a long time and to see him take home the title his senior year was definitely something special,” Ramey said. “With a podium in the 200 IM and the 200 Medley Relay, you couldn’t ask for a better meet. Now the focus turns to Districts.”

He finished second in the 50 freestyle and third in the 100 free.

“Brian thrives when there is fast competition and he really put together a great meet because of it,” Ramey said. “I’m very excited to see those times at this point of the season for him. A district push is what should come next.”

“This relay has only started to show what it’s capable of,” Ramey said. “After breaking the school record only after a few swims, it’s all about putting together the race we all know they are capable of. I’m excited to see them grab some hardware along the way.”

Regovich nearly earned a spot on the podium in the 200 freestyle.

“Lizzie Regovich had a monster swim in her 200 free,” Ramey said. “(She was a) second off of the time swam at last year’s sectionals. Seeing that time at this point in the season gives us all the confidence in a push for districts.”