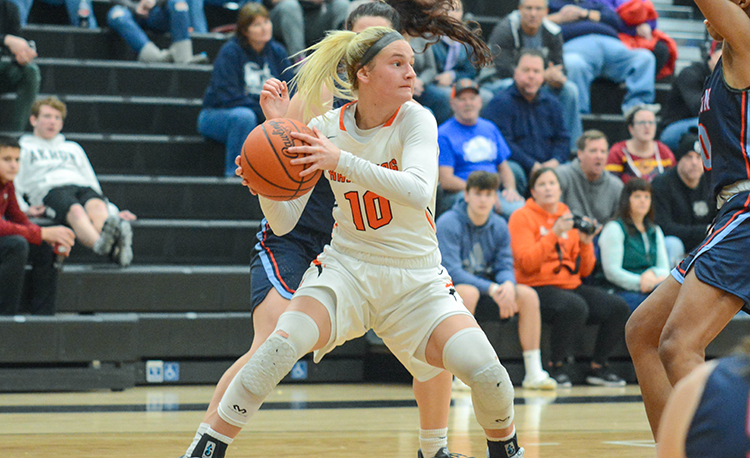 North’s nonconference affair at Twinsburg on Monday was shaping up to be a trap game as the Rangers had just beaten Kenston on Saturday and play rival Willoughby South on Wednesday.

It would have been easy to overlook the Tigers.

Instead, Destiny Leo and Abby Carter combined for 45 points and North nearly doubled up Twinsburg on the glass in a 71-40 win.

“We talked about it being a possible trap game with a big conference game on Saturday and the North-South game on Wednesday,” North coach Paul Force said. “I encouraged them to stay in the moment and stay focused. We don’t want to look by anyone, especially with the second half of the season coming up. There will be a time when we’re going to look back and wish we had one more game to play so we didn’t want to look by anybody.”

Force also was concerned with how his team would respond to playing on the road. The game at Twinsburg was just the fifth for the Rangers away from their home court.

“We haven’t gone on the road and put four quarters together all year so this was a good opportunity to do that,” he said. “We won a close one at Brush and we lost to two Canton teams. Our only other road game was the win over Beaumont. We’ve only played four road games, this was our fifth, so it was nice to come out strong and finish the game off. We got a lot of kids some opportunities.”

The Rangers, who improved to 10-2, build a double-digit lead at halftime and extended that margin to 22 points heading into the fourth.

Leo finished with 24 points and Carter added 21 with a team-high 18 rebounds and six assists.

“Abby and Destiny were both in the mid-20s minutes-wise so we didn’t have to extend them as much as we have in some games,” Force said. “Abby was as aggressive as she’s been all year. That was good to see.”

Carter, who scored just four points in the win over Kenston on Saturday, recorded her third double-double of the season.

“Scoring isn’t something I focus tremendously on but I knew it was important to come out tonight against a good team and take care of the ball and execute our game plan in order to be successful,” Carter said. “Coach Force always puts a lot of emphasis on the concept that rebounds win championships. Scoring and hitting shots is something that may come and go on any given night but I know I have complete control over my efforts to rebound so I made sure to crash as often as I could tonight.”

Carli Wilson drained a pair of 3-pointers to finish with six points and Cece Hamilton and Ledia Vajusi both contributed with five. Avril Drew and Olivia Oostdyk added four points each and Hailie Wilson finished with two.

Leo and Hailie Wilson both pulled down eight of North’s 50 rebounds.