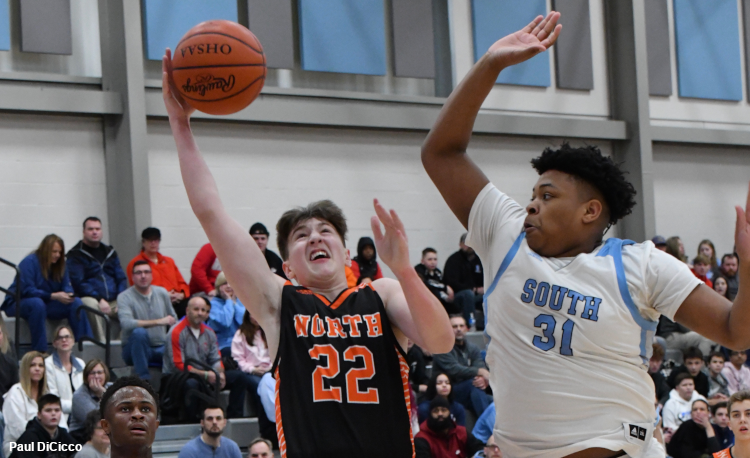 South used two key sequences to hold off visiting North in a rivalry game on Friday, 61-56.

The Rebels dominated the boards early, which led to several easy baskets, then used a double-digit second-quarter run to pull away from the Rangers in the third quarter.

“Those were the two spots where they got some of their points,” North coach Rob Koelling said. “We have to do a better job of getting back on defense and not give up those second-chance points and runs.”

South attacked the glass early, which helped the Rebels build a 17-8 first-quarter lead. North outscored the Rebels in the second, 13-11, and pulled to within 28-21 at halftime.

“Rebounds hurt us in the first quarter,” Koelling said. “We allowed second and third chance points there. Once we finally locked up on that, we started limiting them to one and done and we were able to get into our transition and score.”

The Rangers came out of the locker room and went right to work but after a quick basket, the Rebels responded with a long run that helped them build a 53-37 lead after three.

“We came out on the first possession of the third quarter and executed a play and got a score then they went on a 12 or 13-point run,” Koelling said. “Mentally, we just have to lock that up. They hit a couple of baskets and we’ve got to stop their run.”

Kyle Randle scored eight of his team-high 19 points in the fourth quarter for the Rangers. Mo Morgan added 13 points and Nate Scott also finished in double figures with 11.

North was deadly from behind the arc.

“I thought this was our best decision-making game offensively as far as guys reading what the defense gave them,” Koelling said. “We went out and knocked down 11 3-pointers.”

Will Hagwood scored 17 points to lead the Rebels to the win and Rico Small contributed with 14.