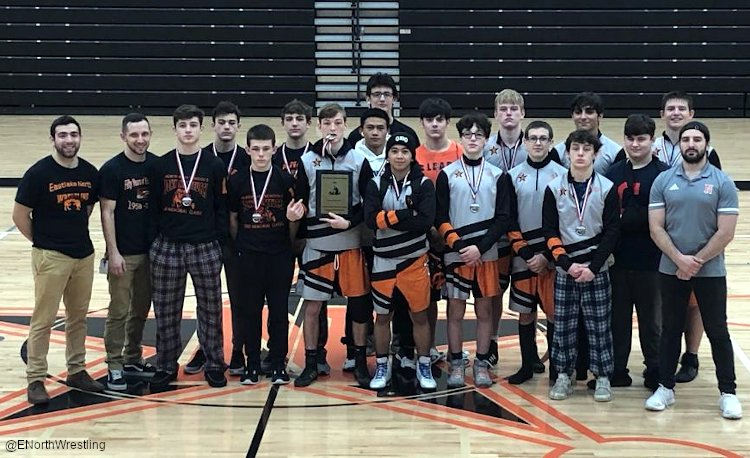 Led by four individual champions, North claimed the team title at the 2020 John Matteucci Memorial Classic at North on Saturday.

“I was extremely impressed with the entire team,” North coach Anthony Grimm said. “Almost everyone placed at the tournament with the exception of just a few. We have been working really hard in practice and we’re starting to finally put together everything we’ve learned through the year and turning it into chain wrestling.”

“All of the boys have been working really hard and pushing each other,” Grimm said. “I will say, all in all, none of us looked tired when it came to the third period and when we had a chance to put a match away, we did not hesitate. Even in matches when we were winning in the third period, we continued to pour on the points, which is a really big deal when you’re trying to build a team score.”

Young took wrestling on his home mats personally and went out and flattened all five of his opponents. Two of those pins came in the first period, including one in 21 seconds.

“Placing in any tournament is always an amazing feeling, but winning on your stomping ground, and on the mats you use every day, with all your blood, sweat, and tears on those mats is an unmatched feeling of confidence, happiness, and reward for all that hard work,” Young said. “My approach today was to be aggressive and stick to what I know. Nothing fancy, just stick to the basics and have confidence in yourself and what you’re doing. This is a huge confidence booster for me, especially being the first tournament I’ve ever taken first place in.”

John Kropf placed third at 132 pounds but did not score as he was an extra wrestler in the bracket.

The Rangers hope this momentum carries into next week’s rivalry match with South.

“Winning as a team should be a really good confidence booster going into our dual against our rival team Willoughby South on Wednesday,” Grimm said. “I am also very excited that out of my entire starting lineup, I only have one senior so next year should be just as good, if not better for us.”