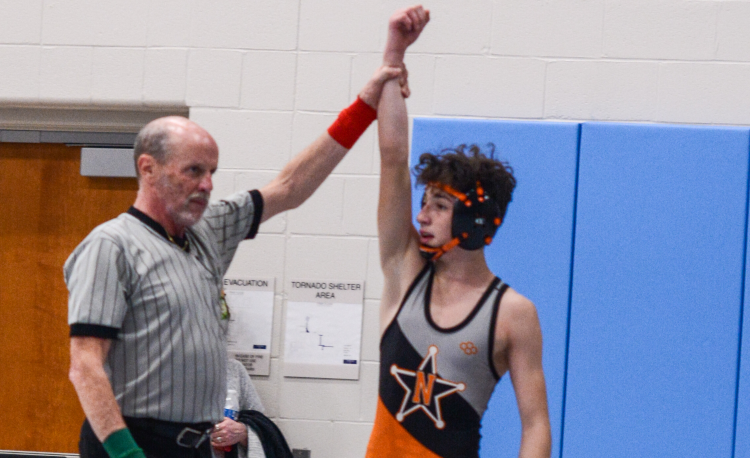 Wins for the North wrestling team against rival South have been in short supply over the years but after Wednesday’s 34-33 win over the Rebels the Rangers are now on a two-match winning streak.

“All and all, I am very happy we defeated South for the second year in a row,” North coach Anthony Grimm said. “Before our victory last year, we had not beaten them since 2007, my junior year of high school. I just hope that this is the start to a very long run of North victories.”

Davis recorded a major decision at 120 pounds, Kundsman flattened his opponent at 132, Young and Kropf won by decision at 138 and 145, respectively, and Hiser and Beck both pinned their way to wins.

The Rangers added a forfeit at 285 pounds.

“We lost some matches we should have won buts it’s the South meet,” Grimm said. “The environment in that gym is loud and crazy and it is easy to psyched out or get lost in the emotion of the match. We had to bump our line up all over the place because the short week, the injuries and the illnesses, which threw the whole team off. A lot of the boys had to bump up and I will say I am extremely proud of them all for stepping up for the team.”

Injuries and illnesses forced Grimm to shuffle his lineup to face the Rebels.

Those moves paid off.

“At the start of our season, I thought we had the South match in the bag,” Grimm said. “Unfortunately, this year was just like years past. When South week comes around, it’s like a plague runs through our room. Our starting 113 and 195 are out due to medical issues. Our 138, 170, and 182 were all sick and our 220 got hurt Monday at practice. To my surprise, all the sick kids pushed through and I am happy they did because they made up for 15 of our team points and our 220 was able to take a forfeit at heavyweight, which made up another six points for the team.”