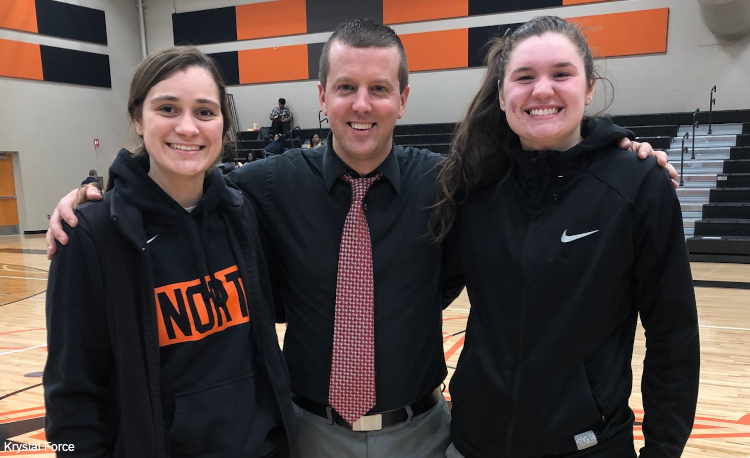 Destiny Leo scored a game-high 34 points and set a school record for 3-pointers made in a career in North’s 64-36 win over visiting Brush on Wednesday.

Leo, who broke the record with her third of four 3-pointers in the game, now has 234 long-range shots to her credit, surpassing the previous mark of 232 set by North assistant coach Lindsey Englebrecht.

The win gave the Rangers a two-game lead over the Arcs in the Western Reserve Conference. North is now 14-3 overall and 9-0 in league play while Brush dropped to 10-6, 7-2.

North jumped out to a 12-1 lead and never let the Arcs get comfortable in their offense.

“We just played really solid on the defensive end to start,” Force said. “You need to get back in transition and slow them down as they’re one of the better transition teams in the area. We were able to do that and get some early scoring from a lot of different kids.”

The Rangers led 29-13 at halftime and extended that advantage to 47-24 after the third.

“I think (Hamilton) has had a nice couple weeks here quietly,” Force said. “She’s turning into a player that can score in spurts, but also she’s starting to impact the game with or without scoring. We have a number of girls that can do that and I think sometimes teams overlook that because of Destiny’s scoring ability.”

North and Brush both finished the game with 34 rebounds but the Rangers pulled down 24 of those boards on the defensive end.

That limited the Arcs’ ability to score second-chance points.

“The key was tying them on the boards and taking care of the ball,” Force said. “They shot poorly, which didn’t hurt either, but I like to think our defense had something to do with that.”

“The offense gets the attention a lot but Abby’s defense is as much responsible for this final score as Destiny on the offensive end,” Force said.

North travels to Mayfield on Saturday.