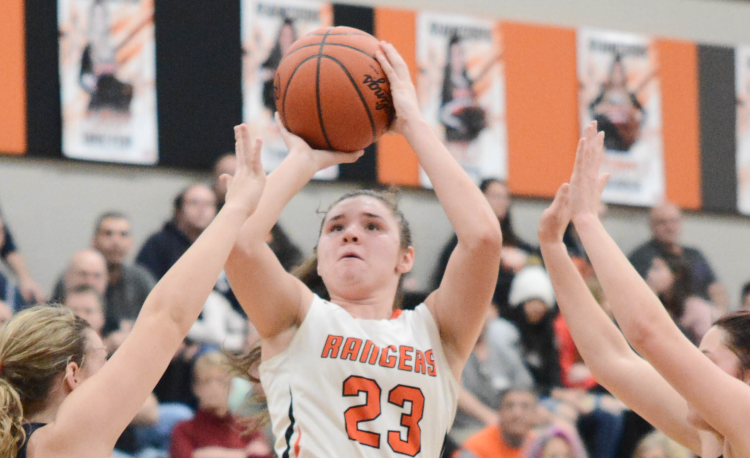 Destiny Leo scored the 2,000th point of her career and two other Rangers scored in double figures as North shrugged off a slow start to beat host Mayfield on Saturday, 55-46.

The host Wildcats jumped out to a 12-5 first-quarter lead before Abby Carter and the Rangers rallied in the second quarter to take control of the game.

“We expected them to be fired up,” North coach Paul Force said. “They beat us two out of the last three years there and Ryan (Looman) does a great job getting them ready to play. We were a little out of sorts early on but Abby got us going energy-wise in the second quarter and all of a sudden, it’s 14-14. 32 minutes is a long time and we just need to trust each other and keep our energy level high regardless of the score. Abby helped us do that today for sure.”

Leo finished the game with a team-high 19 points and Carter and Avril Drew also scored in double figures with 14 and 11, respectively.

Leo stole the spotlight for a moment when her career scoring total reached the 2,000-point mark.

“It’s an unbelievable accomplishment for her and the program,” Force said. “I still remember that first layup at John Hay freshman year. She’s just transformed as a person and player since then. I’m very proud of her, but not kicking her out the door yet, that’s for sure. The ball is still bouncing and she knows she’s got work to do.”

Drew stepped up in the second half as Mayfield was working its way back into the game.

“Avril had a big second half,” Force said. “Destiny and Abby start to get more defensive attention and then Avril or Cece (Hamilton) or Carli (Wilson) get going. We even got a critical finish from Liv (Oostdyk) when things got tight. It was encouraging to see some balance and a lot of girls getting in the scorebook.”

The Rangers improved to 15-3 overall and 10-0 in the Western Reserve Conference.

Mayfield dropped to 9-8, 5-5 but the Wildcats had the Rangers on the ropes at times.

“In the first quarter, I thought we came out really strong on the defensive end and were able to knock down some shots to give us the lead,” Looman said. “Going into the second, we kind of expected them to make a run and they did that. We had a couple lapses in communication defensively and they made us pay, then we tried to match them three for three and that is hard to do. I was still happy with our effort even during that run they made because North was able to knock down some deep 3s and tough running layups, shots that at the end of the day if they go in you tip your cap and give them credit. We lacked the efficiency offensively that we had in the first quarter and parts of the second half. When you’re playing a great team like North, those empty stretches can come back to haunt you.”

Catherine Rock led the Wildcats with a game-high 24 points.

“We say all the time that your best players step up when you need them the most and that’s Catherine in a nutshell,” Looman said. “She was able to attack the rim, knock down 3s, and yet grab 12 boards because of her will and effort. She sees the court so well and was able to read their defense and take what was there. She looked as good today as she has all season, which is insane because she’s been sick all week. Midway through the second quarter, she lost her voice and couldn’t call out an offensive set or communicate a switch on defense so that effort all-around was nothing but guts. That’s her; she’ll do whatever it takes to put her team in the best spot possible.”

The Wildcats rallied to cut their deficit to just one possession heading into the final eight minutes and matched the Rangers point-for-point in the second half.

“I was really proud of how our girls fought in the second half,” Looman said. “Credit to Coach Force and his girls, because they’re the type of team that it takes an elite effort in order just to be there at the end. We had our shots and this is the type of game that if we can duplicate we’ll be just fine as the season comes to an end. I’m super proud of Ashley Dearden and Madeleine Finotti in their defensive effort against Destiny. It’s hard to say you ‘hold’ someone to 19 but they did everything they could to make it tough on her. Same sentiment with Catherine, her play set the tone for where we need to be and what our ceiling might be.”