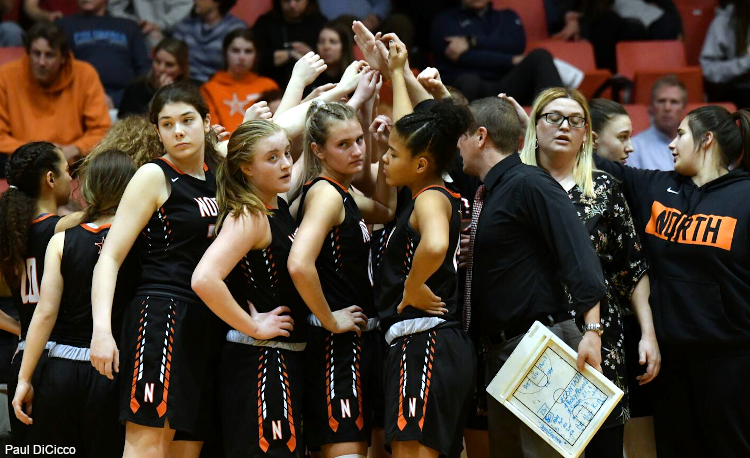 Sometimes, they even do it on the fly as was the case for the North Rangers, who beat Magnificat in a Division I regional semifinal at the Canton Memorial Civic Center on Tuesday, 60-34.

“We decided late to play a little bit of a wide 2-3 zone,” North coach Paul Force said. “They score a lot in transition and in half-court so we made that switch relatively late to see if it could buy us some legs. They’re a little bit deeper than we are but they never really scored consistently enough against it to make us come out of it.”

By late, Force meant to say he added the zone to his game plan at the end of practice on Monday.

“We didn’t work it or rep it live,” Force said. “I just knew they run a lot of stuff we’ve got to be ready for so we’re going to start in a wide zone. We didn’t want to give their shooters too much space and see what they do against it. They moved the ball pretty well and got some good looks, they just didn’t hit consistently enough to be able to score with us.”

Magnificat entered the game averaging over 60 points per game.

North limited the Blue Streaks to just 11 points in the first quarter and never let them reach double digits in any of the three remaining quarters.

The Rangers, who improved to 23-3 overall, were just as effective on the offensive end.

Senior Destiny Leo led all scorers with 32 points, inspired, no doubt, by her past performance in the regional tournament.

“She came down here last year and combined for 21 points in two games,” Force said. “I didn’t have to say anything to her about that, I think she remembers it. She was pretty locked in. The last days she was taking care of her body and focusing on the mental prep and it came together tonight.”

Leo was 13-of-17 from the floor and 4-of-6 from behind the arc. She also pulled down eight rebounds and recorded five steals.

“Just being there last year, being familiar with all of it and the atmosphere it brings helped us a lot and made a big difference tonight,” Leo said. “All of my teammates have done a great job of being there to take over when teams guard me however they want to guard me. It takes everybody.”

While Magnificat focused on taking Leo and Abby Carter out of the game, Avril Drew took advantage the same way she has all season.

“A lot of the biggest plays in that game are when too many eyes or too many bodies go to Destiny and all of a sudden somebody else hits a 3 or back cuts and a layup or somebody gets a put-back, like Avril,” Force said. “She was our Swiss Avril Knife. She was inside, outside, rebounding, defending, and handling the ball. She can do a little bit of everything.”

“It helps a lot that we are capable of being so versatile on defense,” Carter said. “I don’t believe it was the zone that allowed our defense to look good. It was the communication, effort, and energy from the bench to the floor that limited their points. Playing at regionals last year definitely allowed us to feel more comfortable stepping on the court tonight. It was also key that we started strong and never let Magnificat gain momentum.”

The Rangers advanced to Friday’s regional championship game with their first berth in the state Final Four since 1994 on the line.

To get there, North will have to go through GlenOak, who ended the Rangers’ tournament run last year in the same game and already has a 65-43 win over North this season.

“Just like we’re playing at Madison on a Saturday afternoon at one, what we do for this game or what we do for the next one, that’s what we do for all of them,” Force said. “Every game is the Super Bowl. If you’re doing something different come tournament time I think you’re doing your kids and your program a disservice. We’re going to do the same thing we always do. We don’t care who we’re playing against. We’re going to focus on North and whatever color jerseys the other team is wearing is fine with us.”