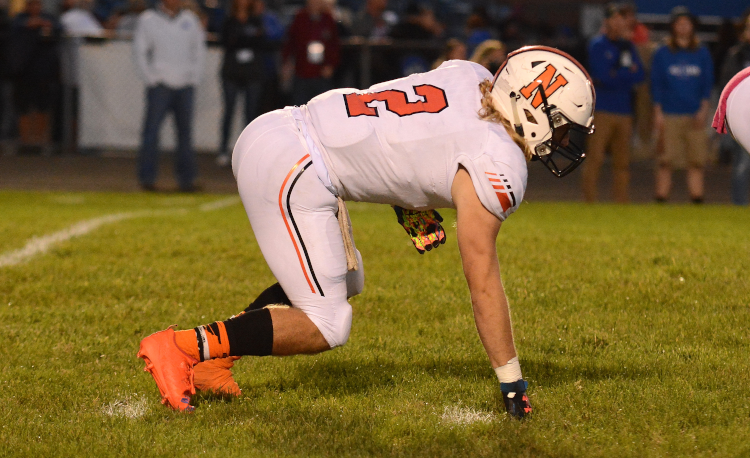 North’s Dylan Froelich wasn’t ready to hang up his cleats and he won’t have to after his commitment to Notre Dame College earlier this month.

“I am beyond blessed to be able to continue playing the sport I love,” he said. “Most people have the dream of playing in college but making it a reality has been one of my biggest goals.”

The Falcons recruited him as a quarterback, which helped to sway Froelich.

“NDC just felt at home,” he said. “It’s only about 30 minutes from home and they gave me the opportunity to play the position I love most, QB at the Division II level.”

North head coach Shawn Dodd is confident Froelich is a good fit with the Falcons.

“He has a strong arm and really enjoys playing QB,” Dodd said. “He has enough ability to help NDC in other positions as well. He adds a lot of depth and versatility and flexibility to a program.”
Froelich played on both sides of the ball for the Rangers and his versatility will prove valuable at the college level.

“I am coming in as a QB with the ability to move around,” he said. “I kind of see myself as a (New Orleans Saints QB) Taysom Hill-type of player. I can do a little bit of everything.”

With his high school career in the books, Froelich has set some pretty lofty goals for his college career and beyond.

“I hope to win a national championship at NDC with a high-caliber team,” he said. “I am just simply going to keep playing until I’m not able to anymore.”

Froelich leaves North with many fond memories, including the night he had in a tough loss against Brush.

He completed 15-of-19 passes for 273 yards and a touchdown against the Arcs and also ran for 179 yards and five scores.

“A couple of my favorite memories were beating South and breaking the streak, of course, going to the playoffs my sophomore year and having a big role on the defense,” he said. “Lastly, my junior year against Brush; my best overall high school performance.”