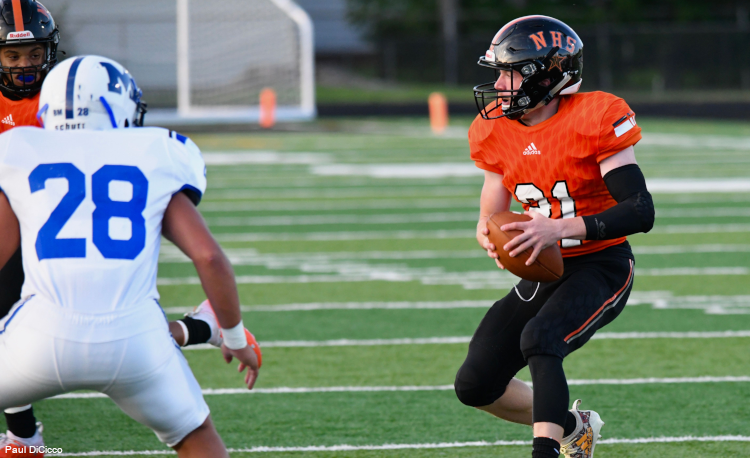 Chris Molica ran for 188 yards and three touchdowns to lead North to a 34-0 win over visiting Madison on Friday.

Molica also threw for 84 yards in the win.

Molica hooked up with freshman Steven Cammack on a 58-yard pass to set up North’s first touchdown, a Donyea Ward two-yard run with 18 seconds left in the first quarter.

Cammack and sophomore Reontae Lowery each had big catches in the win. Lowery also ran for a 65-yard touchdown in the fourth quarter.

“We started two sophomores in the skill spots and they really stepped up,” Dodd said. “Joey Nguyen started at fullback and Reontae Lowery was in the slot. He had a big long run for a touchdown and Steven Cammack is going to be a big-time Division I talent. He had a big pass in the first quarter for a reception. Those are two freshmen that really stepped up in big moments.”

Molica ran for a five-yard touchdown in the second quarter and a 55-yarder in the third quarter to push North’s lead to 20-0. He added his third score of the night early in the fourth quarter and Lowery’s big run closed out the scoring.

North’s defense did the rest.

“It was great to get the shutout,” Dodd said. “I thought the defense played fantastic. Madison came out and played hard. They were a little short-handed, which helped us a little bit, but I really thought our kids really, really played physical for the second week in a row. We’re starting to get better each week in that regard.”

Dominic Marciante led the Rangers with 6 ½ tackles and Curtis Thomas and Adam Kleinhenz both recorded sacks.

Two-way lineman Ryan Baer scooped up a fumble and returned it 70 yards for a touchdown but that score was erased by a penalty.

“He had a big sack and he picked it up,” Dodd said. “He was standing there looking around for a minute and then started running. A dumb penalty on our part got it called back. I don’t think anybody was going to catch him. That kid is as big-time as it gets.”

North (2-1) travels to Kenston on Thursday.