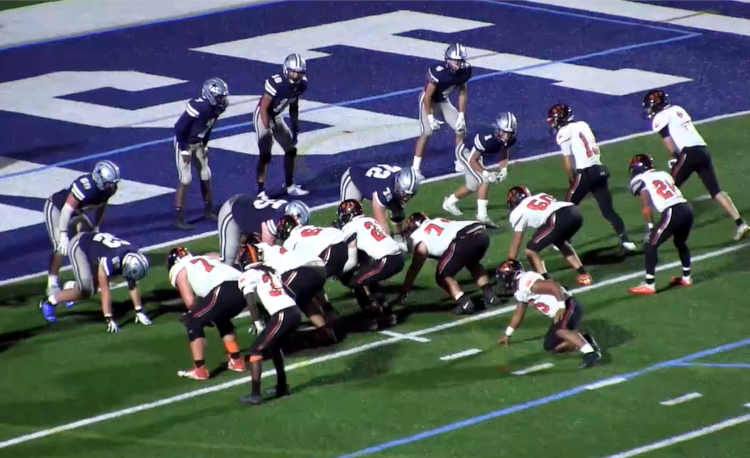 Chris Molica ran for 140 yards and four touchdowns and North’s defense limited host Kenston to just 85 yards of offense in a 26-14 win on Thursday.

“We came out with a mindset of burning the boats, a tactic used by Vikings where when they would go to take over land, they would bring all their supplies, and when they were ready, they would burn the boats so there was no turning back,” said North senior lineman Ethan Spoth. “We all rallied together and knew what we had to do to win and we executed.”

An early fumble set up Kenston’s first touchdown, a six-yard pass from Nikko Georgiou to Carson Rivera-Gebeau, with 3:03 left in the first quarter.

North’s defense bailed out its offense in the first half by pinning the Bombers deep in their own territory late in the second quarter.

After a Kenston punt, the Rangers took over at Kenston’s 39.

Mo Morgan ran for 15 yards on first down and Molica finished off the drive with a one-yard touchdown run to tie the game with 1:43 remaining in the half.

“We started a little slow in the first half with some penalties and a big turnover to give them a short field possession,” North coach Shaw Dodd said. “I thought we were a little bit flat but I was very happy with the way we responded in the second half.”

The Rangers opened the third quarter with a 13-play, 67-yard scoring drive capped by Molica’s 26-yard scamper on third down.

Another defensive stand forced Kenston to punt from deep in its own territory.

North took over at the Kenston 38 but Anthony Valocchi stripped the football and returned the fumble 88 yards for a game-tying touchdown.

“That fumble killed us,” Dodd said. “We’ve got to clean up those types of mistakes. We can’t keep doing things that hurt us. Other than that, I thought the second half was great football, besides the turnover, and I thought our defense played outstanding all night.”

The Rangers allowed just 30 yards of offense in the second half, which allowed their own offense to find its footing.

Behind its mammoth offensive line, North ran for 308 yards on 53 carries.

“We ran the ball very effectively tonight,” said Molica, who has earned the nickname Magic Man for the inexplicable moves he makes on the field. “Everyone was running hard and we just wanted to get the lead and run the clock down.”

Molica ran for two fourth-quarter scores to close out North’s first win over Kenston since 2016.

“I just look for grass and I just go and run as hard as I can,” Molica said. “Honestly, I couldn’t do most of the things I do without the other 10 guys blocking for me; they’re great.”

Kenston had won three straight over the Rangers and led the series 3-2.

The Bombers ran just 18 plays in the second half and averaged just 1.67 yards per play.

“It was just execution,” Dodd said. “We knew they wanted to run downhill but we felt we were a little bit faster on the perimeter so we tried to force it out there. They like to run the one-back power with (run-pass option) stuff and their tight end is one of the best in the state, if not the country, so we wanted to limit his touches. We were keying in on him and did something informational to try to take away some of the RPO.”

Mo Morgan and Reontae Lowery each ran for 55 yards for the Rangers and Molica was 1-for-1 passing for 25 yards. Zack Kozel caught that one pass.

Normally, Dodd would allow his players the standard 24 hours to enjoy extending their winning streak to three games but this isn’t a normal week.