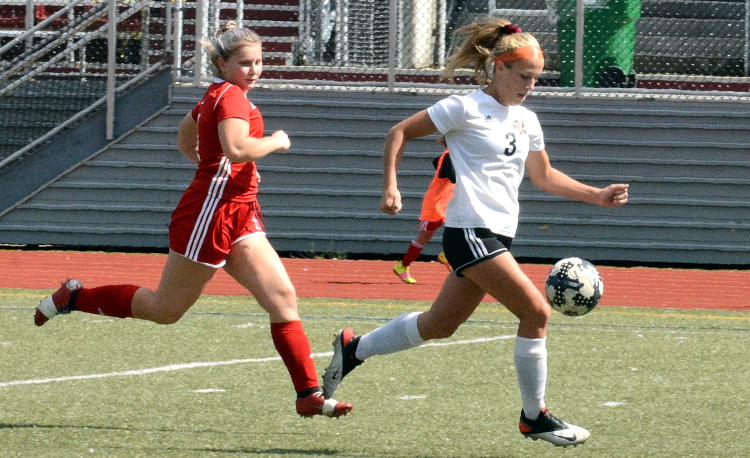 GENEVA—A late goal off of a free-kick proved to be the difference in North’s 1-0 loss at Geneva on Saturday.

The Rangers and Eagles had played to a scoreless tie until Geneva’s Makenna Proy converted a free-kick into a goal with just over 12 minutes remaining in the game.

“Defensively, we weren’t too bad,” North coach Rick Sirl said. “I just don’t think we didn’t utilized our chances. We had too many offside calls and we weren’t running the line good and didn’t think about when we were pushing the ball. It was a little bit of a step back today.”

Geneva controlled possession for most of the first half but the Rangers did have some chances in the final 10 minutes of the opening period.

One shot went wide of the goal while another sailed over the top.

The Rangers were much better in the second half as they generated more of an attack but still couldn’t penetrate the Geneva net.

Their struggles began in the midfield where Geneva’s speed took away many of the passing lanes.

“We were looking for that second or third connecting pass, trying to keep it simple,” Sirl said. “We were trying to jump lines instead of looking for that simple pass to keep possession. Once we start facing speed in the middle like No. 6 or 14 they start panicking and they start to look to play the ball too deep or try to play too many levels right away.”

A contact penalty set up Proy’s free-kick just outside the 20-yard mark.

She punched it through and the Rangers couldn’t find the equalizer.

“We sort of lost our plan,” Sirl said. “We got away from possession and started looking to push balls that weren’t really good. Playing through the midfield was really tough. We had a lot of young players out there today so that was a little rough.”

The Rangers travel to rival South on Tuesday.