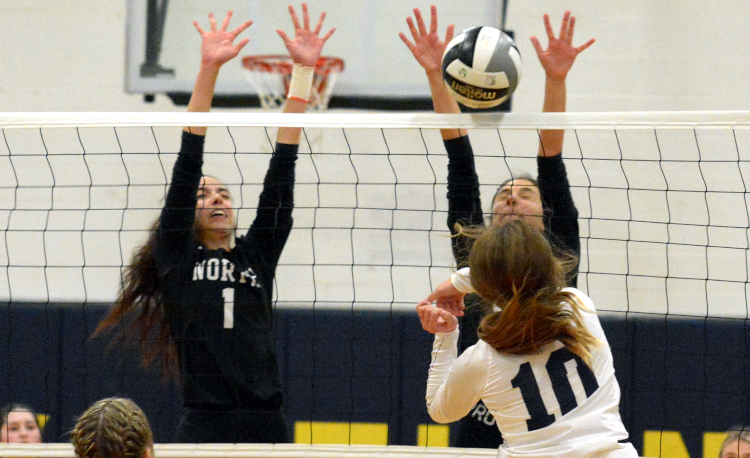 North’s lineup had a new look to it in a 3-0 non-conference sweep at Kirtland on Monday.

The Rangers moved senior Adri George from setter to libero and sent Jaiden Anderson onto the court to handle the setting duties.

“We made a big change with changing setters and our libero, so the slow start I think was more working the kinks out of players adjusting to new roles,” North coach Tamara Heller said. “It felt like we had control of the whole match even if the score didn’t show it at first. We talk a lot about momentum swings in the game of volleyball that, even if we’re down, if the momentum is on our side we’ve got control of the match.”

North improved to 4-5 on the year and with their new look, the Rangers hope to keep building off of Monday’s momentum.

Moving George to libero should help the Rangers in multiple ways, most importantly, by adding experience at the position.

“I was asking a lot of two players coming from the freshman level last year to varsity and starting and also a literal freshman to start at the JV level and then come make an impact with us,” Heller said. “It’s not an easy role. It takes nothing short of a straight go-getter. Adri has simply that. She is a hustler, she is a natural leader, and she competes. She had a great defensive performance against Riverside.”

It was George’s performance against Riverside that prompted Heller to shuffle her lineup.

“We watched her dig balls that night, never once having to tell her to play defense, so you know right there she’s got the grit for defense,” Heller said. “I was confident she would do well, but she exceeded my expectation.”

Anderson also had a big night in her new role.

She closed out the match with 27 assists and two service aces.

“Jaiden has what it takes to be a phenomenal setter,” Heller said. “I have to remind myself sometimes she is 14 years old. I put a lot of pressure on her every day but I think she can handle every bit of it. I was excited to see what she would do with the opportunity and we think she did a great job.”

Abby Carter led the Rangers with 10 kills and also contributed with four blocks and a pair of aces. Katie Alexander pitched in with six kills, a block and three aces and Alison Schimmels posted five kills and three blocks. Kaitlyn Mastroianni finished the night with four kills and an ace.

“Our middles, Allison and Abby, I thought owned the net tonight,” Heller said. “Both blocked very well against a big outside hitter on the other side of the net. I’m also just proud of everyone being good teammates, helping girls in new roles adjust and being solid enough in their own positions to make that switch so comfortable. Everyone was ‘better-ing’ the ball tonight–passers getting balls to target making a new setters’ job easier and then hitters being able to put balls away.”

Kirtland dropped to 1-3 on the year after a third straight loss.

“We’re struggling to find our rhythm,” Kirtland coach Arlayna Newcomer said. “We have some really good moments but we haven’t found that consistency we’re looking for yet.”

The Hornets got off to a late start this season and despite three straight setbacks remain focused on development and jelling as a team.

“We know that every day is a new day to get better,” Newcomer said. “We’re not concerned with the past. We’re looking forward to what’s next.”