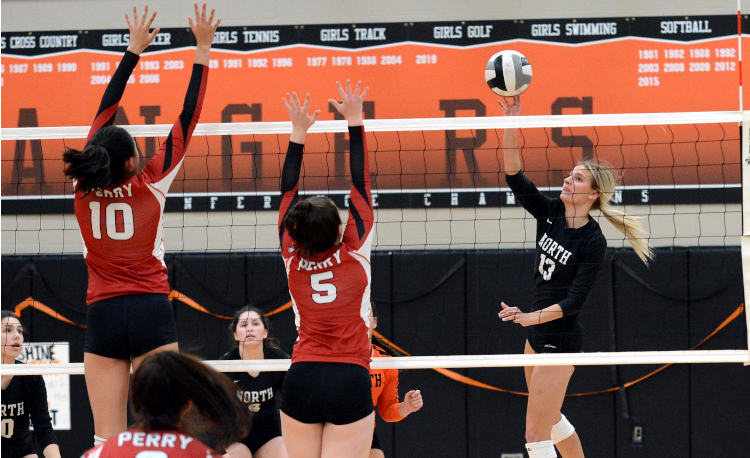 EASTLAKE—North’s seniors rose to the challenge on Monday in a 3-1 non-conference win over visiting Perry.

The Rangers got off to a slow start but rallied together—led by their four seniors—to win the final three sets of the match.

“I think today was the most together I’ve seen us play in a while,” North coach Tamara Heller said. “We used every girl out there and it was a team effort, which is what we’ve been struggling with.”

Perry opened the match with a 25-21 win in the first set but the Rangers regrouped and upped their intensity.

“Especially after losing that first game, I still felt we were playing as a team,” Heller said. “We saw when we play as a team we can beat a good team and a team that’s doing better than us, record-wise.”

Perry’s Sammie DiBease entered the match averaging almost four kills per set but the Rangers slowed her down and kept the rest of the Pirates in check.

“We kept the ball alive and we played scrappy,” Heller said. “I knew their go-to hitter was going to be their outside hitter and I think we got in our head a little bit, which was our game plan. I was proud of that too.”

“We need everyone to be able to win,” Heller said. “In the beginning, we weren’t even giving ourselves opportunities to put a ball away or to give our hitters the best opportunity to put a ball away because we simply didn’t have the defense on our serve-receive. That’s been the biggest focus ever since the beginning of the season and slowly but surely we’re working the kinks out.”