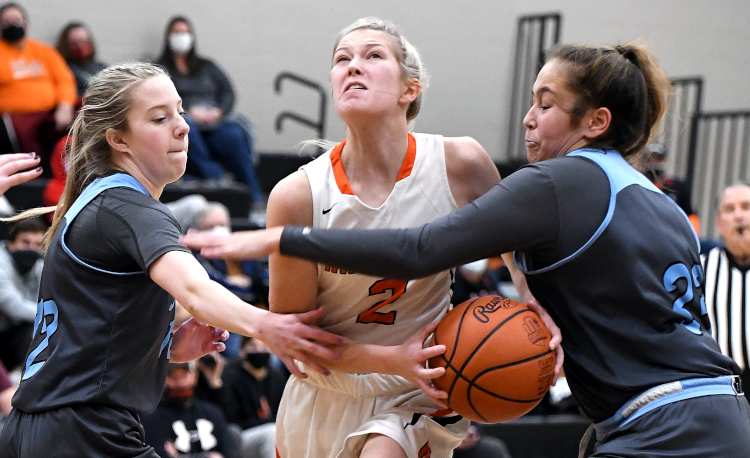 EASTLAKE—North held its Senior Day earlier this season but that didn’t stop the Rangers’ five 12th graders from making a final stand in a 67-30 win over rival South on Wednesday.

“I think that’s the first time all year that all five seniors scored,” said North coach Paul Force. “It hasn’t really sunk in yet but those five played their last game on this floor. What we’ve been through this season and the resiliency they’ve shown and the togetherness they’ve shown, I couldn’t have written a better ending for those five.”

The beginning of the game wasn’t so bad either, from North’s perspective.

North jumped out to a 14-2 first-quarter lead and then scored the first 14 points of the second quarter on the way to a 29-10 halftime advantage.

“We talked about how important the first quarter was,” Force said. “At their place a week ago, they kind of jumped on us, so we talked about the importance of starting the game strong, especially on the defensive end. The girls know that shots come and go but if we can defend and limit them to one-and-dones then we thought we’d give ourselves a nice opportunity to get some space there and the girls did it. They played great defense in the first half.”

Carter led the Rangers with a game-high 21 points and Drew finished with 16. Vitello sank a pair of 3-pointers on the way to an eight-point night and Wilson and Kononow finished with seven and two points, respectively.

Cece Hamilton contributed to the win with seven points and Dori Siekaniec and Samantha Cantrell each pitched in with three.

North opens the postseason at Walsh Jesuit on Saturday.

Last week, South went toe-to-toe with the Rangers until midway through the third quarter.

The Rebels weren’t able to establish any offensive rhythm against the Rangers on Wednesday.

“We just didn’t make shots,” said South coach Mike Coreno. “Last game we played them, they scored 24 in the first half and they had 29 in this first half. We just couldn’t put the ball in the bucket in the first half. When you’re down that big you just start forcing stuff so the game gets out of reach. You just tell the kids to go out there and play hard.”

The Rebels will look for redemption in their postseason opener on Saturday at Green.

“We can go down there and end their season and move on,” Coreno said. “That’s our focus now. We’ve got two days to get ready.”