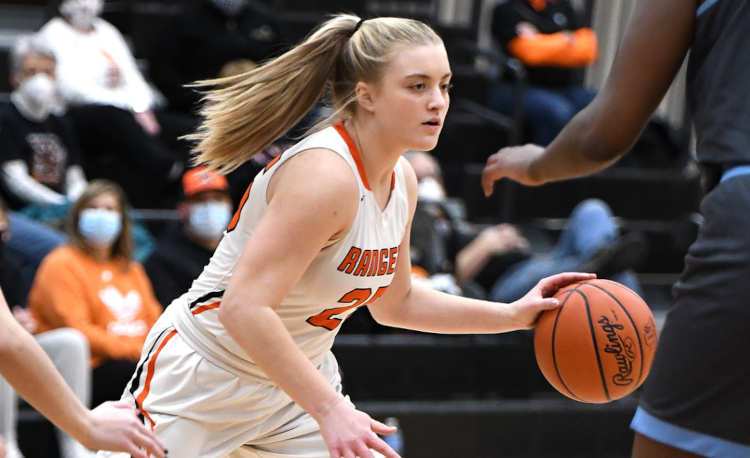 North’s shortened season came to an end with a 37-26 loss at Walsh Jesuit in a Division I sectional semifinal on Saturday.

The Rangers held a slight 18-12 advantage at halftime but some clutch shooting from Walsh’s Abby Garner in the third quarter shifted the momentum to the Warriors and North never recovered.

“We had them guessing in the first half and they didn’t hit shots,” said North coach Paul Force. “In the second half, they had a girl score eight points and hit back to back 3-pointers. That was a game-changer with how we were struggling to put the ball in the hoop. Credit Maggie (Ferrando) and her staff. They defended us well and we didn’t execute how we had expected to.”

North shot just 21-percent from the floor but the Rangers had some success early on due to their effort on defense.

“In the first half, although we didn’t shoot great, our defense and rebounding carried us,” Force said. “I felt we took care of the ball and battled on the boards and that got us out to that halftime lead. Those two things are huge keys against a team as good as Walsh is.”

Abby Carter led the Rangers with 12 points and Avril Drew scored nine. CeCe Hamilton finished with three and Dori Siekaniec was the only other Ranger to score as she pitched in with two points.

North closed out is COVID-shortened season with a 9-5 record.

North’s top returning players next season are Hamilton and Siekaniec.

Hamilton finished the year with 3.8 assists and 1.8 steals per game while both Hamilton and Siekaniec drained 12 3-pointers this season.

“Everyone would love to play one more game this time of year and I’d be lying if I said that I didn’t want to run it back for one more with this group,” Force said. “That being said, we are extremely proud of them, especially the seniors, for showing the class, character, resilience and togetherness they showed this year. The off the court stuff means so much more when it comes to what our program is about. The life lessons, shared experiences and relationships these girls have formed are what we are all about. The on-court stuff is great, but here at North, it’s bigger than just basketball and this group understood and embodied that.”