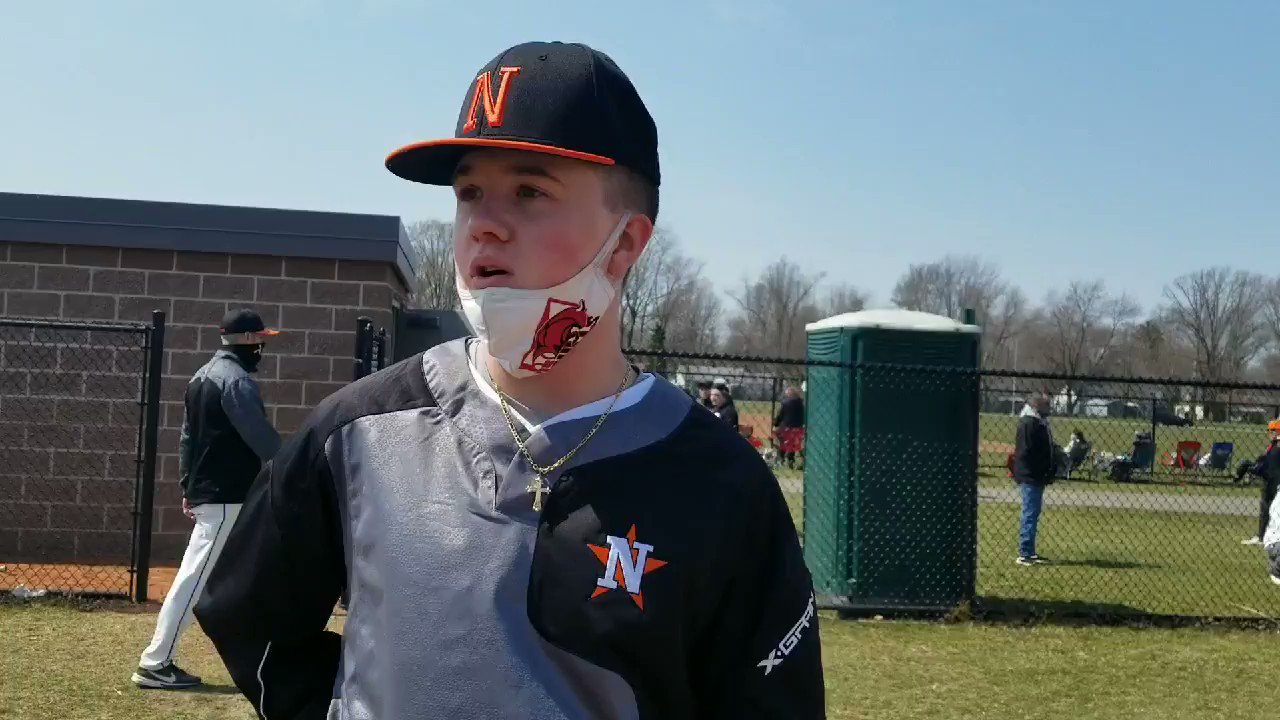 Logan Metz pitched a complete game and North manufactured a pair of runs to beat visiting Mentor on Saturday, 2-1.

The win over the Cardinals was the first for the Rangers since a 3-1 win in a Division I district semifinal on May 20, 2015.

“It was amazing,” said North coach of the rare victory over Mentor. “We love playing them because we know how good they are. They’re one of the best in the state. We just talked about keeping everything under control and playing the way we’ve been practicing and focusing on the details and that’s what they did.”

He got ahead of the Mentor hitters by throwing 16 first-pitch strikes to 28 batters he faced, which allowed him to use his full repertoire of pitches.

“He works really, really hard and takes care of his arm every day,” Stahlberg said. “When he goes out there and trusts his stuff and throws all his pitches for strikes, he keeps people off balance. His secondary pitches are really good so when he can establish those it makes the fastball look faster and people aren’t ready for it. When he’s throwing all three of his pitches, he’s really tough to beat.”

Metz allowed just one unearned run on seven hits and he struck out five. He also benefited from some outstanding defensive plays, which led to more confidence on the bump.

“It felt really good beating Mentor for the first time in a while,” Metz said. “We just went into the game fired up hoping for a win. It gets me hyped up knowing my teammates have my back in the field, especially if it’s a good play.”

The Cardinals made Metz work as they put their leadoff hitter on base in the second, third, and fourth innings.

It wasn’t until the fifth inning that Mentor broke the scoreless tie.

Aidan Buckley led off the inning with a double and scored on an error to give Mentor a 1-0 lead.

The Rangers responded with two runs in the bottom half of the inning.

Brody Spock doubled on the first pitch of the inning. Nathan Stuck then walked and both runners moved up a base on a wild pitch.

After a strikeout, John Lanning hit a groundball to the shortstop, who tried to make a play at the plate but Andy Haller, who ran for Spock, beat the tag to tie the game at 1-1.

Joey Skolny drew a walk and then Trent Bucy stepped to the plate with two outs. Bucy reached on an error that gave North a 2-1 lead.

Mentor’s Kadyn Burkholder doubled with two outs in the sixth but a heads-up play by Lanning ended the threat.

On a groundball that pulled Spock up to the grass at third base, Lanning sprinted to the base and fielded Spock’s toss in time to apply the tag for the third out.

“That play by Lanning was amazing,” Stahlberg said. “It was kind of just intuition on his part and then athleticism to catch the ball and turn around to slap the tag on the guy, who he really couldn’t see coming. It was phenomenal.”

Lanning also made an outstanding defensive play to end the game.

“The wind was blowing out hard and he ran a fly ball down all the way into our bullpen to catch a popup at the end of the game,” Stahlberg said. “I thought it was going to be a double all the way but he literally ran down to our bullpen and caught a ball right on the line that would have been fair.”

Devo Britsky and Spock had North’s only two hits of the game. Mentor’s Gray was 2-for-4 as the Cardinals collected seven hits.

It was a solid defensive performance by @NorthBaseball1 and Coach Stahlberg talks about how the defense has been in the early part of the season pic.twitter.com/sMLUDJmWSs

A good day on the mound for @NorthBaseball1 Logan Metz, as he gets the complete game win over Mentor pic.twitter.com/XgFMqXscSe

It’s a fast start for @NorthBaseball1 and today’s game is another example of what the Rangers can do. Trent Bucy talks about that and his game winning RBI single in the fifth inning pic.twitter.com/iqG7YsoQLZ