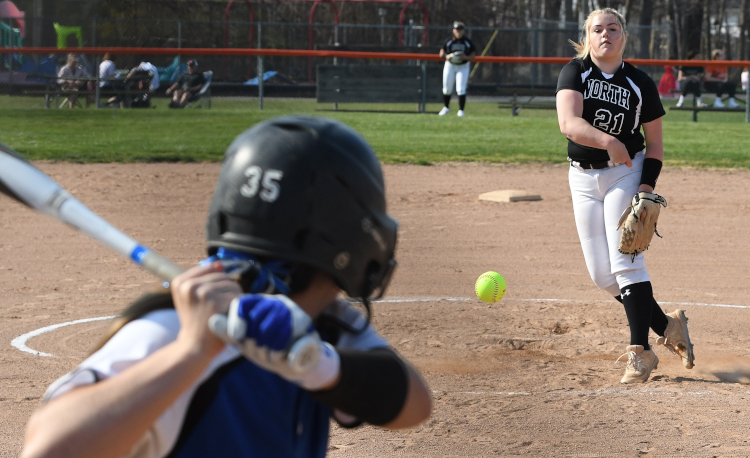 EASTLAKE—North scored three runs in the bottom of the sixth and had the winning run on base in the seventh but the Ranger rally fell short against visiting Madison on Tuesday.

The Blue Streaks scored four runs in the third inning and that held up as they pulled out a 4-3 victory in a key conference matchup.

“That one inning definitely killed us,” said North coach Taylor Braddock. “Errors got us. That one inning, that’s what we told the kids. It was just one. Every other inning, I’ll take that defense any day.”

Chloe Wakim singled to start Madison’s third-inning rally. Jenna Kadas then attempted to sacrifice her to second but an error left runners at second and third with no outs.

Nadia Cruz then hit a sacrifice fly to center to give the Blue Streaks a 1-0 lead. Lavdis then reached on an error and Hallie Blackford hit a 1-2 pitch off a tree beyond the left field fence to push the Madison lead to 4-0.

Augusta would allow just one walk and one hit the rest of the way. She retired 11 of the final 13 batters she faced and finished the game with nine strikeouts.

“I thought Olivia pitched one of the best games I’ve ever seen her throw,” Braddock said of her pitcher. “Take one pitch away and it’s a closer game.”

North had its opportunities but the Rangers couldn’t capitalize with runners on base in four of the first five innings.

The Rangers broke through in the sixth when Jess Dodd singled and Hailie Wilson drew a walk to put runners on first and second with no outs. Augusta then helped her own cause by launching an 0-2 pitch over the fence in left center.

Emily Zaleski and Maddy Cicero both singled with two outs but the Rangers couldn’t score the tying run.

Dori Siekaniec singled to lead off the bottom of the seventh. Dodd sacrificed Siekaniec over to second and the Blue Streaks opted to intentionally walk Augusta with two outs. That move paid off as Lavdis struck out the next batter to end the game.

Lavdis finished the game with 14 strikeouts, including eight uncontested.

“At the end of the day, it was the looking strikeouts,” Braddock said. “We preach to them to go into the batter’s box swinging and today they did not do that. Credit to Madison’s pitcher, she’s good. She throws hard and she throws strikes. Hopefully, tomorrow we come out swinging the bat.”

The Rangers travel to Madison on Wednesday.