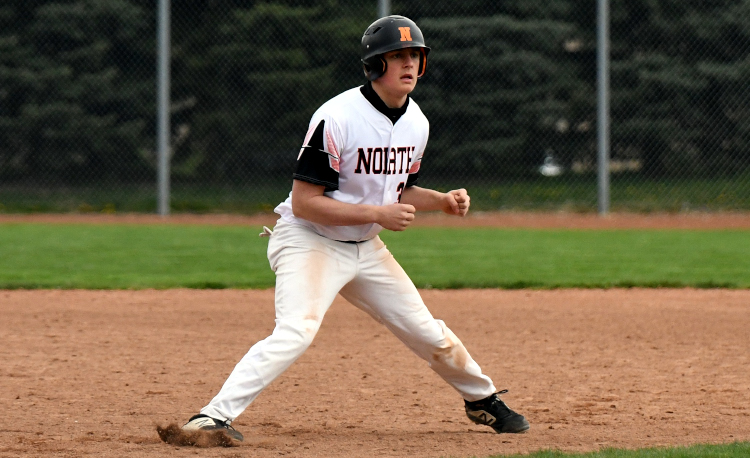 North drew a bases-loaded walk in the bottom of the seventh inning to push across the winning run in a 4-3 victory over visiting Kenston on Monday.

With the win, the Rangers improved to 12-4 overall and 6-3 in the Western Reserve Conference. The victory also kept North in the hunt for the WRC title but the Rangers will need some help to unseat Mayfield, who currently has just one conference loss.

Kenston manufactured a run in the top of the first when Ryan Gilbert led off with a single, stole second, and moved to third on a wild pitch. He scored on a groundout.

The Rangers, who snapped a four-game losing skid with a win over South on Sunday, didn’t hang their heads.

They took a 2-1 lead in the bottom of the second.

“One of the things we talked about at the end of the game, especially when you play a good opponent like that and they put a couple of runs up on you, it would be easy for many teams to get down but you couldn’t tell any difference in our dugout,” Stahlberg said. “These guys, I think at this point with how things have gone, have enough confidence in themselves where they know how dangerous they can be that they’re in it until the end.”

Devo Britsky singled to start the two-run rally and Joey Skolny doubled to put runners on second and third with no outs. After back-to-back strikeouts, Nathan Stuck tripled to give the Rangers a 2-1 lead.

The lead was short-lived as Kenston scored two more runs in the top of the third on two singles and three walks.

Sean Pesci started the game but was replaced by Trent Bucy after walking a third straight batter in the inning.

Pesci allowed three runs on three hits and struck out three in 2 2/3 innings of work.

“When he’s locked in, his stuff is awesome, it really is,” Stahlberg said of Pesci. “There are times where he can get a little wild but when he’s locked in, he has some of the best stuff around and he can keep guys off balance. It was good to see what we know he can do.”

Bucy allowed one hit in the inning but pitched out of the bases-loaded jam and shut out the Bombers the rest of the way.

He pitched 4 1/3 scoreless innings and allowed just three hits and struck out four.

“Bucy is, in my opinion, one of our big arms,” Stahlberg said. “We had to take it slow with him at the beginning of the year for a couple of reasons, but he’s getting more opportunities down the road here. Today, was kind of him breaking out, especially against a good opponent like that because he had to come in and shut the door on them. It was good to see that out of him.”

The Rangers manufactured a run in each of the final two frames to win the game.

Matt Barner drew a leadoff walk in the sixth and moved to second on a passed ball. Trent Bucy then grounded out, leaving Barner at third with one down. Britsky then doubled to tie the game at 3-3.

Britsky finished the game 2-for-3 and now is hitting .419 this season.

“He has spent a ton of time in the offseason making sure that he was using the whole field and he’s done it phenomenally,” Stahlberg said. “He started off hot and he’s still pretty hot. It’s just been awesome to see him go up there and be consistent with his approaches. He’s just not trying not to do too much and he’s doing a great job of doing everything we’ve worked on.”

Bucy allowed a single and two walks in the top of the seventh but kept the Bombers from scoring the go-ahead run.

That gave the Rangers the chance to win the game in the bottom of the seventh.

Brody Spock and Stuck drew back-to-back walks to start the inning and John Lanning beat out a bunt single to load the bases with no outs.

The Bombers then recorded an out at the plate but Barner drew a four-pitch walk to force home the winning run.

Lanning and Bristky both finished with two hits and Bucy claimed his first pitching victory in his longest outing of the year.

North travels to Kenston on Wednesday.