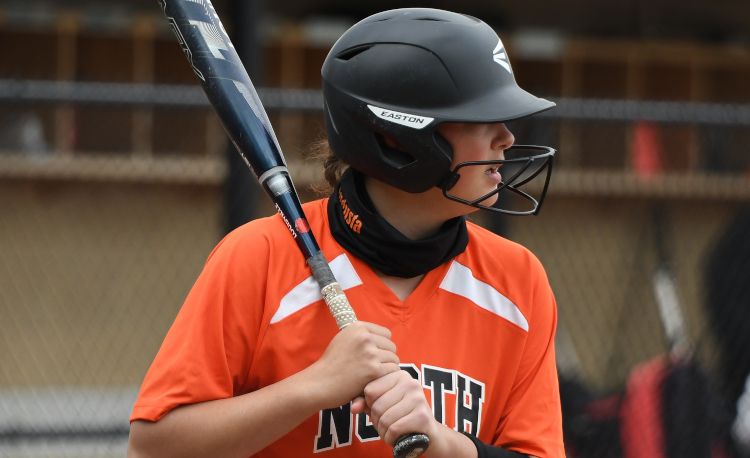 Juliana Augusta was 3-for-3 with three extra-base hits in leading North to an 11-0 five-inning win at Kenston on Wednesday.

Augusta doubled, tripled, and hit a home run in the game.

“I was so close to completing the cycle, just one more at-bat and I would have had that,” Augusta said. “This game has probably been the best game I’ve had all season. My key to my success today was to not overthink and do what I do best, and that is to hit the ball and play the game.”

While Augusta fell short of hitting for the cycle, she did score three runs and she knocked in four more and now has four hits in her last six at-bats after a tough stretch when she was just 2-for-11.

“There is something coach Taylor (Braddock) said to me that I think about every time I’m at the plate,” Augusta said. “‘Believe in yourself you got this,’ and every time I think I’m going to struggle up there, I think of that. The one thing that really got me going, too, is that I know I have my team behind me supporting me with everything I do and my coaches believing in me and my actions.”

North went scoreless in its first at-bat but Amanda Dobida, who pitched a one-hit shutout with eight strikeouts, was hit by a pitch with two outs in the second. Augusta then hit an RBI double and scored on Alyssa McPeek’s two-bagger to give the Rangers a 2-0 lead.

Dobida reached on a fielder’s choice in the fourth and Augusta delivered again, this time with her third home run of the season.

“It was a high fastball and those are my favorite if I can get my bat on it,” she said. “When I hit that ball, with the pop of the bat, I knew it was gone. It felt amazing to hit that home run.”

The Rangers went on to score seven runs in the fifth to invoke the run rule.

Dobida allowed her one hit of the game with two outs in the bottom of the fifth.

The three hits and four RBI were a season-high for Augusta, who is now hitting .385 on the year with 20 RBI.

“Today was a big day for me,” Augusta said. “My confidence was already high but now it’s higher because now I know what I’m really capable of when I hit. Moving forward with the season and the games, I’m not going to let my confidence get in the way for the most part. We have some great teams coming up; now it’s time to focus and be prepared for what we have coming at us next. We all put in a great effort that game.”

Dodd finished 2-for-2 and Siekaniec also had two hits for the Rangers, who improved to 12-3 overall and 7-3 in the Western Reserve Conference. The Rangers host rival South on Monday.